The Half Size Brand Leslie Pomer

Regular blog readers know my fascination with half sizes, a category designed specifically for shorter and wider women. Although half size clothing existed before World War Two (and part of my quest is to discover the origins), business boomed after the war. Many large clothing companies opened special divisions to produce these kinds of clothes.  The mega brand Leslie Fay opened its half size line, Leslie Pomer, in 1956.

I found the first ad for Leslie Pomer in the New York Times in early 1957.  By the following year, notices started appearing in smaller local newspapers like the San Bernadino Sun.  A local department store in this Southern California city promised a session with a fashion coordinator from the company to help customers pick out a spring wardrobe.

In the late sixties and early seventies, the company put a few advertisements in Vogue intended to show that half sizes didn’t need to be frumpy.  “Leslie Pomer makes the kind of clothes everybody who loves fashion would love to buy. It so happens we only make them in half sizes,” read the caption of the ad above. 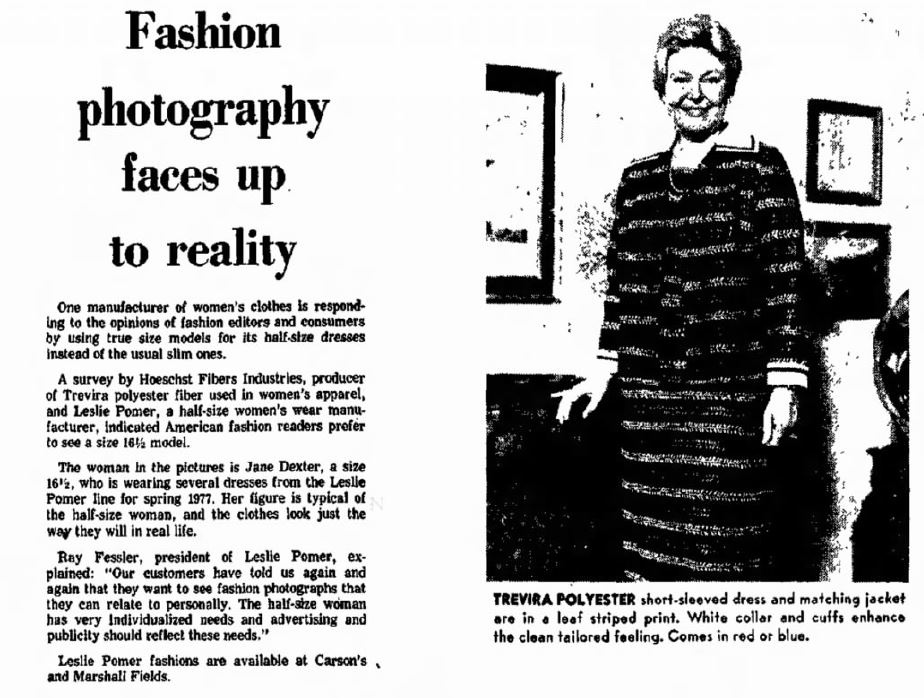 And in the later seventies, the company tried the novel approach of showing their clothes on women who actually wore half sizes. The company president, Ray Fessler,” is quoted as saying “The half-size woman has very individualized needs and advertising and publicity should reflect those needs.”

Newspaper mentions fell off dramatically during the 1980s, and the trademark was officially retired in 1998.

Entire companies were devoted to half sizes in the mid to late twentieth century, but the the category has all but disappeared today. I doubt that women who fit this size have also disappeared.

This entry was posted in 1960s, 1970s and tagged advertising, sizes. Bookmark the permalink.

1 Response to The Half Size Brand Leslie Pomer