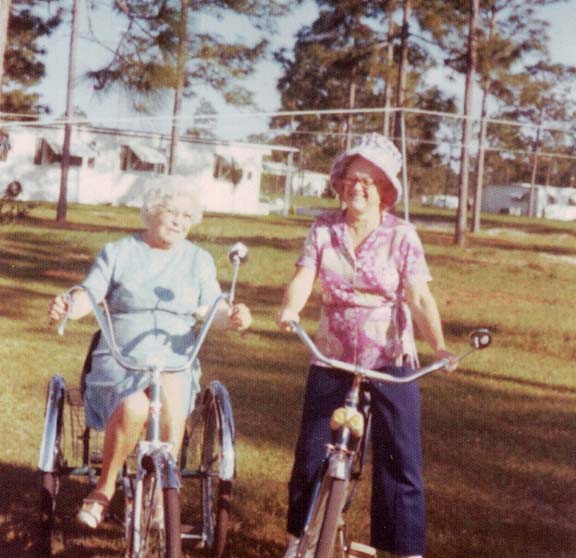 During the 1970s, it became more frequent for older American women to wear pants. Obviously that was not the case for the white haired woman on the left, who kept on her dress for a spin on an adult tricycle.  If I’m seeing the details correctly, pants would have been a more modest solution.  Her skirt is riding up pretty far on one leg.

Her companion might be her daughter, who looks quite a bit younger.  She appears quite at home in a pair of wide legged trousers.  But what’s on her head? It looks like an old style sun bonnet, fashioned to match her blouse.  Maybe she made them both herself.

There are two dates on this photo—1976 written in pen and the printing date of February 1984.  Both could be inaccurate, since people often make mistakes when they date photos; in addition, film can be developed long after it was taken.  But the wide legged jeans on the right convinced me that the hand written date might be more accurate.

Where do you think they are?  I’m guessing it is some kind of family camp with sports equipment available for all ages, even the oldest.

This entry was posted in 1970s and tagged hats/headcoverings, pants, sportswear. Bookmark the permalink.