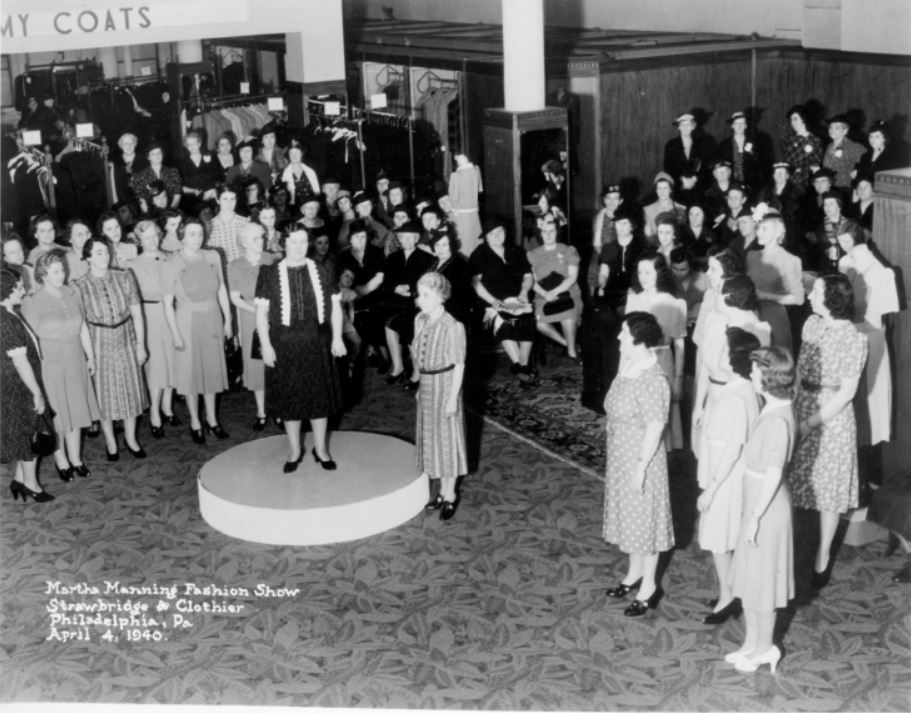 Although I don’t yet know when or how half sizes were invented, by the 1940s there were a number of clothing lines devoted to the older, shorter, wider woman. One of the best known was Martha Manning, a clothing company based in St. Louis. That their target groups was older women is clear from the language of their ads. “Martha Manning designs women’s dresses with a flattering air…Creates a youthful YOU.”

The company began in 1939, so this photo documents its early steps into department stores. I’m assuming that the women standing, mainly in lighter colors, are models. Those sitting, wearing dark colors, are the potential customers. You can see how the designers used tried-and-true methods for slimming down the figure—color blocking, vertical lines, drapey fabric, soft folds. The company also made some dresses in regular sizes, shown by the few young models on the right.

In the 1940s and 1950s, the garment industry in St. Louis was mainly associated with youthful fashion. However, as the New York Times fashion writer Virginia Pope pointed out, the city’s manufacturers excelled in many types of specialty sizes, including junior, tall, petite, and half sizes. She notes that Martha Manning was part of a large operation called Forest City Manufacturing that also made the junior brand Doris Dodson and the sportswear brand Glen Echo. (“Accent on Youth in St. Louis Togs,” New York Times, March 17, 1951.) 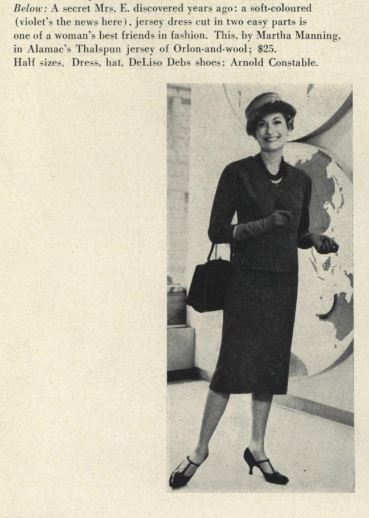 Martha Manning was not a budget brand. It advertised extensively in Vogue, beginning in 1941 and ending in 1965. Vogue editors returned the love, mentioning the brand fairly often in fashion layouts. Moreover, stylist to the older woman, Mrs. Exeter, endorsed Martha Manning styles four times in the 1950s. Here’s one 1958 example: “A secret that Mrs. E. discovered years ago: a soft coloured (violet’s the news here) jersey dress cut in two easy parts is one of a woman’s best friends in fashion. This, by Martha Manning, in Alamac’s Thalspun jersey of Orlon-and-wool; $25. Half sizes.”

If I’m not mistaken, the model playing Mrs. Exeter in the photo above is the globe trotting Mary Whelchel.

5 Responses to Half Sizes, Part 3–The Martha Manning Brand