Kay Thompson : A Pioneer in Pants 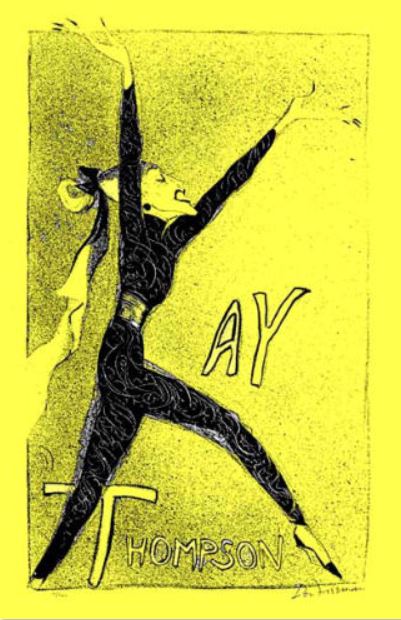 Unless you love the Eloise books or frequently watch the 1957 film Funny Face you might not know the name Kay Thompson (1909-1998).  She was a well known entertainer from the thirties on, with a long list of achievements: singer, night club performer, vocal coach, song writer, music arranger, dancer, choreographer, actress, and author.  In the fashion world, she gained brief fame as the choreographer for the Americans in the famous fashion show in Versailles in 1973 that pitted New World designers against their established French counterparts.

But here’s an accomplishment that surprised me: Thompson was a vocal advocate for women in pants. An entire chapter of a recent biography by Sam Irvin, Kay Thompson: From Funny Face to Eloise (2010) is devoted to her trial blazing fashion choices. Already in the 1930s, she appeared in publicist materials for her vocal group wearing pants. When she established her career in nightclubs in the 1940s, pants were her most frequent outfit, a far cry from the slinky dresses worn by other chanteuse.  Her favorite style stopped well above the ankle, a cut that came to be called Capri pants. Thompson claimed to have thought them up herself before they became well known in the fashion world. 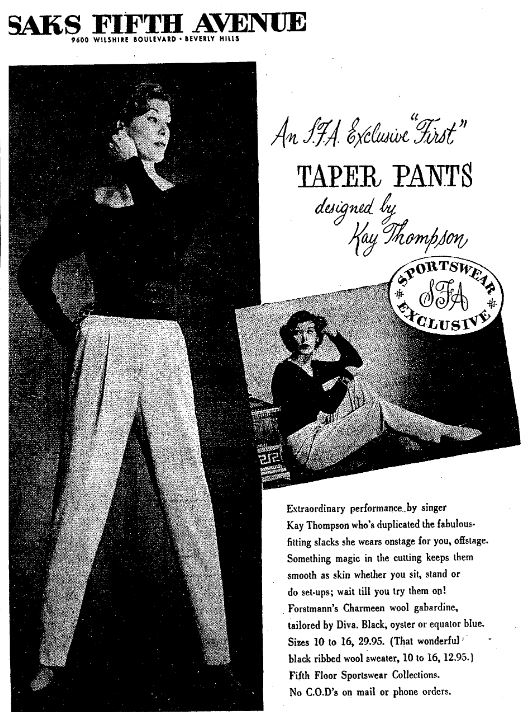 In the early 1950s, Thompson even launched her own line of pants, produced by a subsidiary of Evan Picone and sold exclusively at Saks Fifth Avenue.  Above is the only ad I found for them—looking longer and looser than the ones Thompson herself favored.  “Something magic in the cutting keeps them smooth as skin whether you sit, stand or do set-ups,” the ad copy reads. 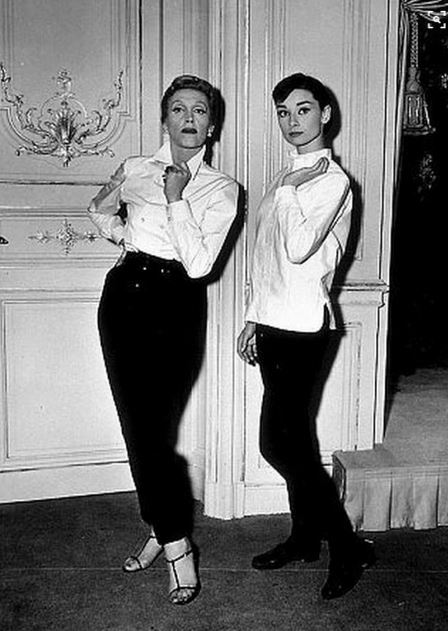 According to Irwin, the pants that Audrey Hepburn wore in Funny Face were from Thompson’s line.  And Thompson, playing a high class fashion editor, wore her own pants in the film as well. 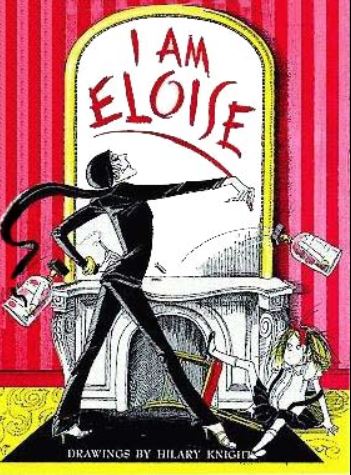 When Hillary Knight, the illustrator of the Eloise books, paid homage to Kay Thompson in 1996, just before her death, it’s hardly surprising that he drew her in pants.

5 Responses to Kay Thompson : A Pioneer in Pants