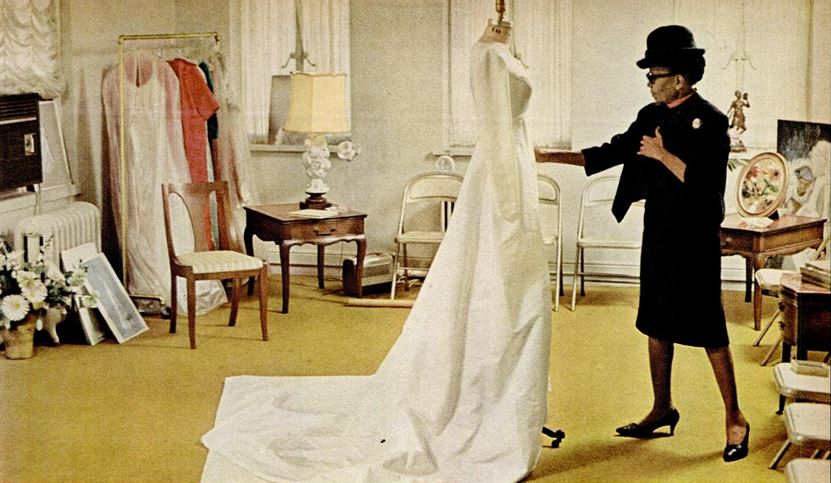 Ann Lowe (1898-1981) was the first African American to open a custom dress studio on Madison Avenue in Manhattan. During the fifties and sixties, she was a favorite designer for the moneyed elite, creating debutante and wedding dresses. Perhaps her most famous client was Jacqueline Bouvier.  She designed the dress that Jackie wore to marry John F. Kennedy in 1953.  She also created the coming out dress for Jackie’s step sister, Nina Auchincloss, two years later.

Born in Alabama, Lowe came from a family of seamstresses. She began her professional career in Florida, coming to New York in 1916 to further her skills.  While attending the S. L. Taylor School of Design, she had to sit in separate classroom away from the white students.  Her first independent studio opened in Tampa in 1919.  By the late 1920s, she had saved enough money to move to New York.  There she quickly acquired an elite clientele.  Specializing in luxurious fabric and exquisite details, she claimed that she never made the same dress twice.

In 1969, Ebony published a long article on Lowe, “Dean of American Fashion Designers” by Gerri Major, that traced the ups and downs of Lowe’s career.  She was an excellent designer but not a very good business woman.  In the course of her lifetime, she opened and closed many studios and once had to declare bankruptcy.  Her lifetime of work never brought her riches; for decades she and her sister shared a two bedroom Harlem apartment.

Lowe dressed for work in a high necked black dress, a kind of uniform. Her outfit included a hat worn a hat to cover her thinning hair. By the time the article was written, she was growing frail and had lost an eye to glaucoma. After work, she had to go to bed to preserve her strength for the next day.

Today Lowe is mainly remembered as the designer of Jackie Kennedy’s wedding dress. However, her list of clients included many other well known American names, including the Roosevelts, the Duponts, and Marjorie Merriweather Post.  Nine of her creations are housed at the Metropolitan Museum of Art.  My favorite, of course, is this simple style in orange.

4 Responses to Ann Lowe, Custom Designer for the Upper Crust