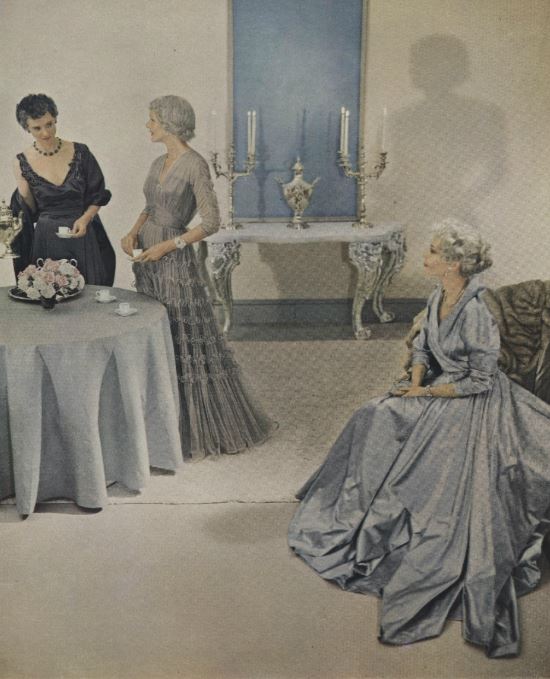 Vogue’s introduction of Mrs. Exeter, a fashion icon for the older set, was more than a gimmick to sell clothing to an older demographic. It marked a real shift in tone in the magazine, a declaration that the no longer young were worthy of interest. One case in point is the article “New Fashion for the Adult Years,” (September 15, 1948). It appeared a few months after Mrs. Exeter’s debut and expressed the magazine’s new approach. “Perhaps we are getting over Youth Worship, and beginning to realize that youth is not essential to beauty.”

All the clothes featured in this article were made by the now almost forgotten designer Madame Eta, one of the few who “have made a specialty of this group of women; studied their proportions, their colouring, the shape of their lives as well as their silhouettes.” Eta Hentz (1895-1986) was born in Budapest and came to the United States in 1923. Although she started designing under her own name in the mid 1930s, it was not until in the mid to late 1940s that she began to attract the fashion press. 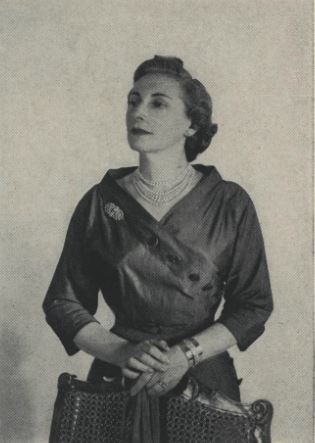 Here’s how Vogue described her: “She wears her steel-grey hair short, but a soft short, and always impeccably neat. Here, she wears grey silk Shantung, the neckline cut away at the throat (a very elongating trick), her creamy pearls massed over her collar bones, a single brilliant pin, angled to the slant of the surplice.”

Madame Eta was a niche designer, focusing on older petite women. Rather than using the category of “half sizes,” by then associated with the not so young and not so slim, she called her system “proportionate sizing.” In the words of one Carson Pirie Scott ad from 1946, “Her famous proportionate sizes are scaled to the more mature figure, with the emphasis on graceful harmony of line, slimming detailing.” (Chicago Tribune, September 22, 1946.)

In some of her fashion shows, Eta Hentz put her designs both on a standard sized model and on an older, grayer, and shorter woman. “The smaller dress, when worn by a gray haired matron, lost none of its smartness,” wrote New York Times fashion reporter Virginia Pope. “Madame Eta creates clothes for women that have dignity of style and at the same time a young spirit.” (“Grace of Medieval Costume Lends Tone to Dresses for Modern, Active Women, New York Times, September 26, 1945.)

The Fashion Institute of Technology archive has a small collection of Eta Hentz’s papers. When I go to New York this coming fall, I hope to take a look. I’ll keep you posted.

3 Responses to Madame Eta’s New Fashions for the Adult Years, 1948