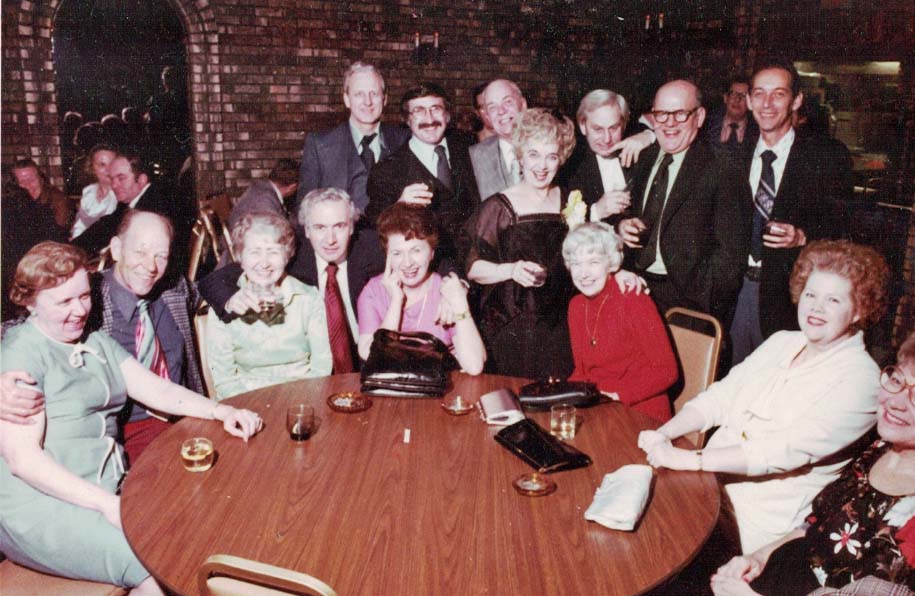 What’s the occasion? I’ve been trying to figure out a story to go with this thrift store photo for a quite awhile. There are two generations—the middle aged (40-50 year olds) and perhaps a few of their parents. Was this a birthday party? A bridge club dinner? A quick drink before friends headed different ways? The puzzle in part lies in the very different kinds of clothes these people wear.

Some fashion historians see the 1970s as the era when common rules of dress flew out the window and people began to wear whatever suited them. “If by fashion we mean some generalised style worn by a class or a community, [it] is being replaced by anarchy,” wrote Quentin Bell his 1976 book On Human Finery.

While “anarchy” is too strong a word for this photo, there is certainly a wide range of  dressy and casual clothes. The dyed blond center right is dressed up in a filmy black number, as if she were heading out to the opera. She hugs another party goer wearing a knit turtle neck sweater. The woman on the far left has on an ill-fitting casual dress, while the red head on the right is in what looks to be a knit suit. And while I’m mainly interested in women’s clothes, what about that wild tie on the gentleman on the left, the most casual of all the men? Did he pick it out to coordinate with his wife’s dress?

At least in this crowd, pastels were a popular choice. So were knits. And we can see that red hair dye was already a phenomenon in the seventies.

I’d love to hear the story you would spin to match the photo.

That Seventies Polyester
Mother’s Day at the First Christian Church, 1973
Honoring Mexican American Women, 1975
This entry was posted in 1970s and tagged hair. Bookmark the permalink.