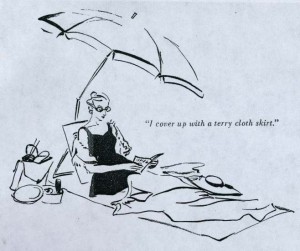 Mrs. Exeter was born in June 1948 on the pages of Vogue magazine; she was “fifty-odd” years old.  Over the next decade and a half, she would reappear at various intervals and give fashion advice to older women.  The column was written in a breezy, conversational style with liberal quotes from the fictional heroine.  “The very first thing to learn…and don’t ask me why, it’s far too psychological…is to forgive oneself.  I, for example, forgive myself my thirty-three inch waist.”  In this first installment, she was on a hunt for the perfect bathing suit.  Her solution was to have one custom-made.

I would dearly love to know who thought up Mrs. Exeter, but my queries to the Condé Nast Corporation have gone unanswered.  Was she inspired by long-time Vogue editor Edna Chase, who would have been 71 when Mrs. Exeter arrived on the scene?

Mrs. Exeter was a very well-off woman—who else could afford a custom-made bathing suit.  Yet despite her privileged milieu, she might have offered a hopeful message to women of a certain age.  According to the anonymous writer, Mrs. Exeter accepted her age.  “She isn’t young looking. She is good-looking.”