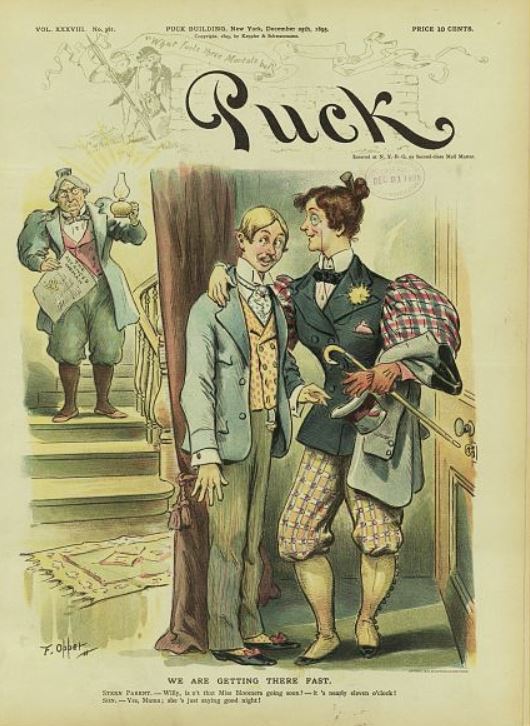 When women took up bicycles in a big way in the 1890s, it resulted in a kind of moral panic in the media about the potential effects of women wearing bloomers (or what we would today call knickerbockers.)  Women took to the wheel because a new design made bikes easier to ride with skirts, but it was still an awkward affair. Historians of dress have shown that only a small minority of women riders solved the problem by donning some version of pants.  Nonetheless, this was enough to spark a storm of caricatures in the media.

For conservative commentators, pants on women meant the complete reversal of gender roles.  We see that in this cartoon.  The text at the bottom reads: Stern Parent—“Willy, isn’t that Miss Bloomers going soon? – it’s nearly eleven o’clock!” / Son—“Yes, Mama; she’s just saying good night!”  The women here have taken on men’s role.  Miss Bloomer, who is taller than the boy, is the suitor.  And it is the mother, not the father, who chides her son to get inside. 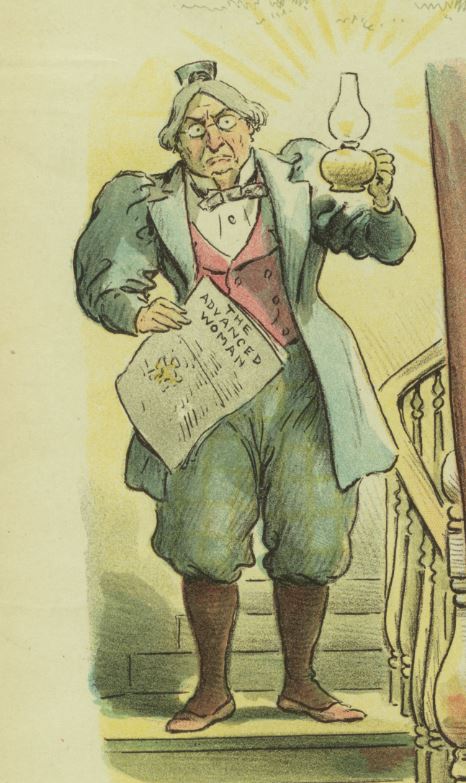 I loved this cartoon for its depiction of the mother.  It is usually young women who are presented in disruptive fashions, but in this drawing the mother is also in bloomers. Moreover, she has a copy of “The Advanced Woman” in her hands.  The artist Frederick Burr Opper portrayed his vision of a world turned upside down where all women, young and old, had abandoned their traditional roles.

This entry was posted in Pre 1900 and tagged generations, pants, popular culture, satire. Bookmark the permalink.