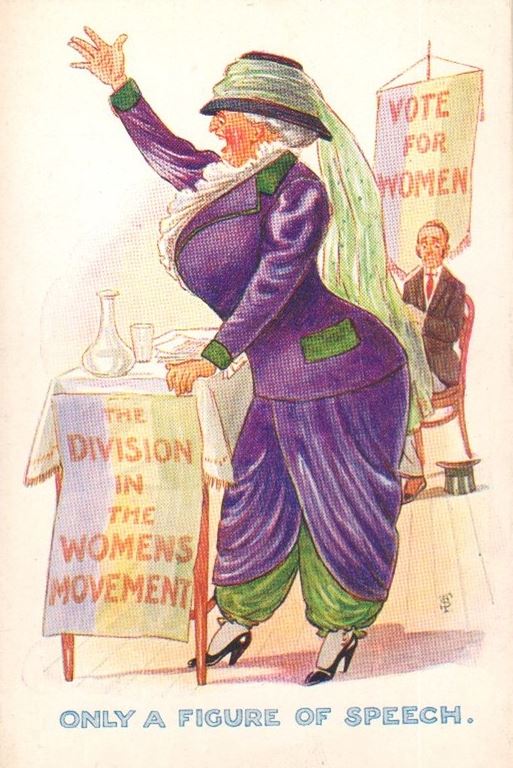 This British postcard from around 1910 makes fun of older women, current fashions, and women’s suffrage all at the same time.  But how accurate was it?  Were there older women in harem pants, or other kinds of bifurcated garments, appearing in public in the early decades of the twentieth century?

I am fascinated by this question.  Up until now, I have let random pictures tell the story.  But I have decided take a more systematic approach, reading up on the history of American women who chose to break with the assumption that pants were only for men.  For European American women, the process started in the mid nineteenth century with the Bloomer outfit.  Public censure made this a short lived as a wider trend, but did some stick with it? And were there others like the famous/infamous Dr. Mary Walker who abandoned women’s clothes altogether? By looking more closely at biographies of such women, I hope to get a better sense of how many older women were willing to take this step and the price they paid for their decision.

This doesn’t mean that I have given up on photographs, though.  If you know of any pictures of American women over fifty who choose to wear pants before the 1970s, I would love to see them!

The Hip Shelf and the Older Woman, 1948
Treasure and Trash on Pinterest
Joshua Tree, 1940

This entry was posted in 1910s, General, Pre 1900 and tagged pants. Bookmark the permalink.