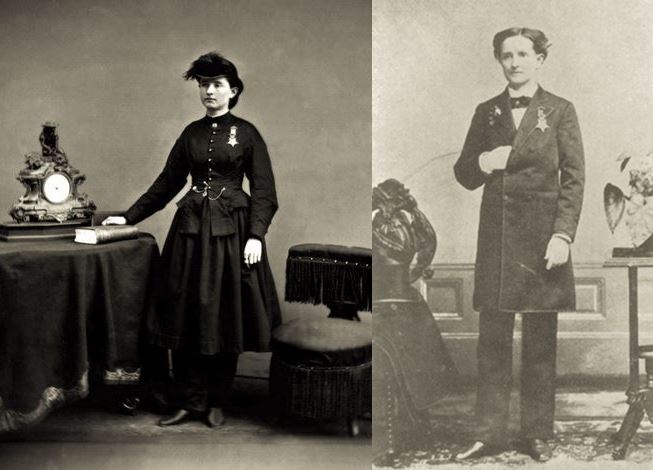 Next time you worry that it might take a long time to reach your goals, consider the case of Dr. Mary Walker (1832-1919)–physician, feminist, and dress reformer. She worked her entire life to gain equal pay and suffrage, along with the right for women to dress as they pleased. For her, these issues were intertwined.  Walker died just before American women gained the right to vote, and we still don’t enjoy equal pay for equal work. It took a full century after Walker started wearing pants full time in the late 1870s for women to be able to wear them to work. Maybe in another century, all her goals—including respect for transgender people–will have been achieved.

Walker was born into the dress reform movement, a cause endorsed by both of her parents. In her youth and middle age, she wore a bloomer outfit featuring a short skirt with pants underneath. In this garb she attended medical school and worked as a doctor for the Union cause during the Civil War. Her dress constantly got her into trouble. It was used by congressmen of both political parties as a reason to deny her a government pension for her war service, even though she had been awarded a Congressional Medal of Honor.  She was accosted on the street and even arrested for her chosen style.

In the mid 1870s, Walker abandoned the dress part of the bloomer outfit altogether and started wearing pants and a frock coat. She also gave up feminine hairstyles, hats, and frills. Her most recent biographer, Sharon M. Harris, doesn’t offer any explanation for this extraordinary move in her study Dr. Mary Walker:An American Radical (2009).  Perhaps Walker decided that if she was going to be criticized for her clothes anyway, she might as well dress as she pleased. 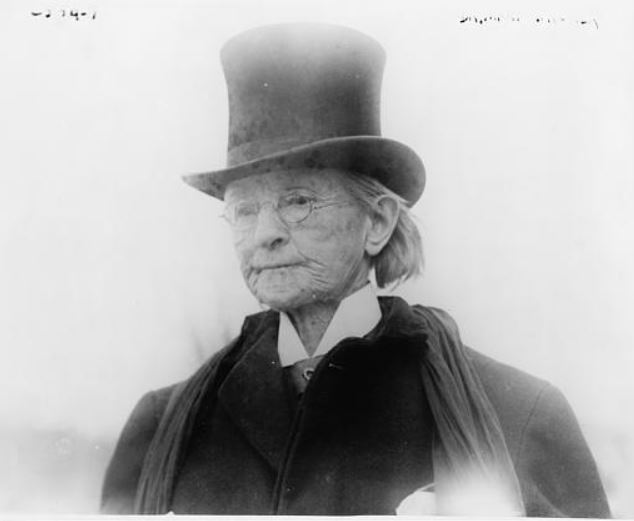 Walker in 1911, Library of Congress

She continued to call her style “reform dress,” not men’s dress.  It was a changeless look.  She kept all the elements–straight legged pants, frock coat, and top hat–for the rest of her life, always accessorized with the Congressional Medal of Honor.

By the early twentieth century, Walker began to win praise from the press, which had hounded her in her youth and middle age. A 1911 headline in the Washington Post asserted that Walker, “whose ideas on garb were subject of rough jest the world over, lives to see many of them adopted” (Washington Post, September 10, 1911).

Book Review: Dressed for War by Nina Edwards
At the Breakers Bath House, ca. 1906
Flowers and the Older Women—Violets, Yes; Daisies, No

1 Response to Dr. Mary Walker, A Pioneer in Pants