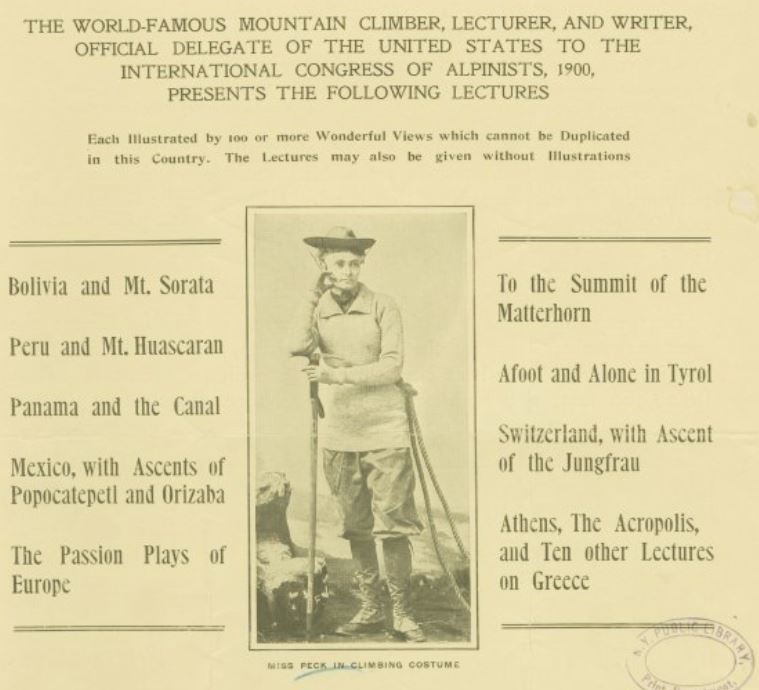 When did older women give up their skirts? The oldest photo I have in my collection is from the 1940s. However, fashion historian Lizzie Bramlett recently wrote about an older woman who made history by hiking in knickerbockers in the 1890s.

The adventurer was Annie Smith Peck (1850-1935). One of the first women to enroll at the University of Michigan, she got a degree in Classics and taught Latin at Purdue University and Smith College. She began climbing mountains in earnest in her forties, and soon left her academic post to earn her living as a public lecturer. In addition to her explorations, she was also an active suffragette.

Women had climbed the Matterhorn before, but Peck was the first to document doing it without a skirt in 1895. Her knickerbockers, which she presented solely as a safety feature, made more news than her climb. “She made the knickerbockers and leggings herself,” reads the lead in one New York Times account. (“Miss Peck, the Mountain Climber,” NYT, 1/16/1898).

After tackling mountains in Europe and North America, in her fifties Peck began climbing  the Andes. It took her five tries to reach the summit of Mount Huascarán in Peru, an adventure chronicled in her 1911 book A Search for the Apex of America. For these climbs she augmented her knickerbockers with an eskimo suit borrowed from the Museum of Natural History. (A Search for the Apex, 1911, 5).  Although she hired the guides and financed the trip, she admits to doing all the cooking. 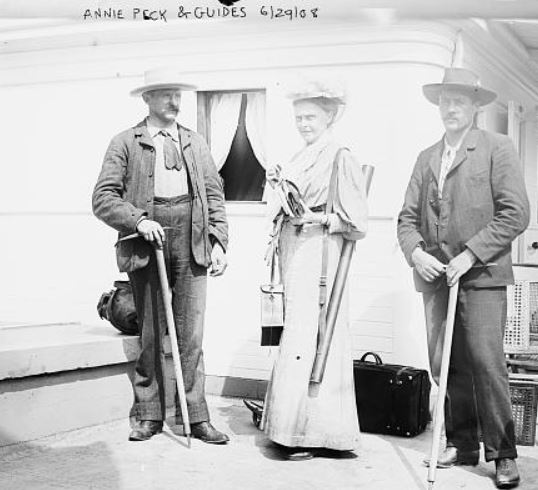 In interviews and newspaper features, Peck always insisted that her move to pants was for safety, not to challenge social norms. Unfortunately, she became something of a fashion scold in her old age, complaining about how young women dressed in the 1920s. “Certainly [knickerbockers] are more modest than the knee-length dresses of today, with no more substantial coverings for the legs than transparent silk stockings!” (“Dean of Women Mountain Climbers,” Daily Eagle, 2/27/1927)

A Southern California Thanksgiving, 1906
The Garrison Family at Schroon Lake, 1908
On the Street in Chinatown, ca. 1900
This entry was posted in 1900s, Pre 1900 and tagged pants. Bookmark the permalink.

1 Response to Annie Peck in Knickerbockers