“We Three in our Muumuus” 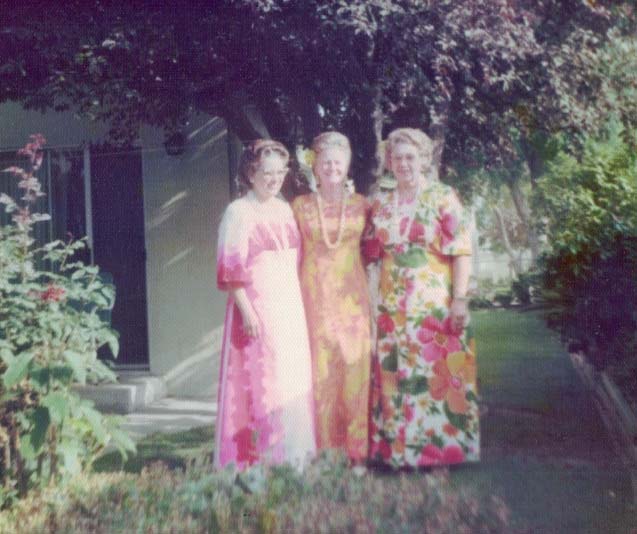 “We three in our Muumuus. My side yard and my bedroom door in the background.”

This seventies era photo cries out for a story, doesn’t it? I suspect that one of these women had retired to Hawaii and invited old friends for a visit. They all wear leis, the Hawaiian mark of welcome. The snapshot not only shows off the colorful local clothing but also her new home.

From my cursory web search, I discovered that the muumuu is the product of imperialism. They were introduced by missionaries to Hawaii in the early nineteenth century as a way to cover up the local female inhabitants. Initially they were just sack dresses, but then evolved into a kind of Mother Hubbard construction, with a yoke at the top and gathering beneath. Eventually just about any colorful long or short dress could be called a muumuu, with the name depending mainly on the brightly patterned fabric. These women’s dresses are empire style, fitted under the bust.

A year ago I spent a week in Honolulu and spent a lot of time looking for older women in muumuus. I didn’t see any. That wouldn’t have been the case in the 1970s, though. According to a 1972 article in the Los Angeles Times, “the muumuu is still the Who’s Who of fashion for the tourist in Hawaii. Everyone from little old ladies in tennis shoes to swingers shows up in a muumuu, from the blatantly patterned sack types, to flowing alii (royalty) versions, to sexy fitting numbers called angel muus.” (February 6, 1972) I’m glad that little old ladies at least receive a mention.

Searching for Koko Beall
The Half Size Brand Leslie Pomer
Older Women in Pants--A Progress Report
This entry was posted in 1970s and tagged Hawaii, textile patterns. Bookmark the permalink.

3 Responses to “We Three in our Muumuus”