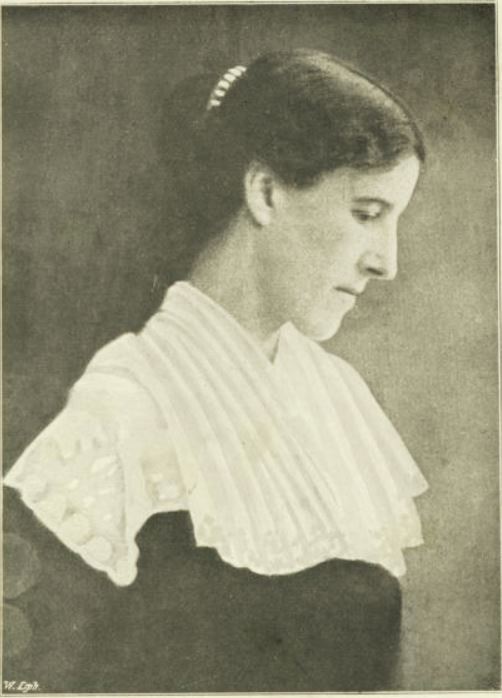 Feminist philosopher Charlotte Perkins Gilman (1860-1935), suffragist, novelist, and economist, spent a lot of her life thinking about clothes.  She considered herself a dress reformer, but was not interested in the extremes of bloomers or pants.  Instead, she followed her own path, looking for what she considered to be beautiful and comfortable styles.

Gilman’s ideas on dress are laid out in a fascinating dissertation by Melyssa Wrisley, Fashioning a New Femininity: Charlotte Perkins Gilman and Discourses of Dress, Gender, and Sexuality 1875-1930. (Binghamton University, 2008). Looking not only at her printed work, but also at her unpublished letters, Wrisley outlines the meticulous attention Gilman gave to dress.

Already as a teen, she began designing her own clothes.  After her first marriage failed and she began to earn her own living as a lecturer, she took great pains to put together a presentable wardrobe, making many of her clothes, using hand-me downs, and buying a only few items.  She was not interested in following fashion and gave up corsets and high heeled shoes early on.  However, she also was not a fashion eccentric.  She wanted to find her own way, but not be “too glaringly contrasted to the [current] fashion.” (230)

Gilman moved to New York in 1910 at the age of fifty, now remarried. There she started publish her own magazine, Forerunner, and became a noted speaker on feminism and suffrage. While many of her colleagues tried to fit into current fashions in order to appeal to their audiences, Gilman refused to do this.  She felt that the urge to follow rapidly changing styles was part of women’s subjugation.  But unfortunately her own increasingly old fashioned looking clothes became the subject of many commentaries, rather than her ideas. By trying to find her own path, she had become a kind of eccentric after all.

“Never in my life have I been able to dress as I would like to,” wrote Gilman in her autobiography published in 1935. “That requires one or more of three things I never had enough of, time, strength, or money. And since I would not wear what others did if against my principles of hygiene, truth, beauty, or comfort, or humanity . . . the result has left much to be desired. Real beauty I cared for intensely, fashion I despised.” (quoted in Wrisley, 1)

I hope Wrisley’s fascinating work gets published as a book—and let me put in a strong word for pictures.