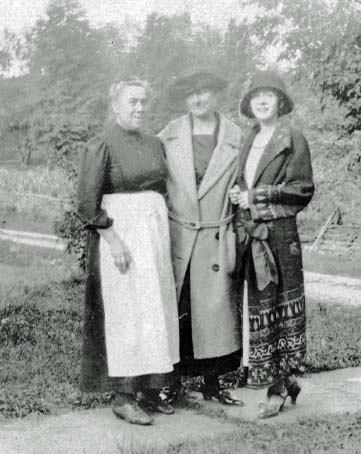 Three generation photos are some of my very favorites because they offer a chance to see how different age groups interpreted, or ignored, current styles. This might be a grandmother, daughter, and granddaughter, although the faces are quite fuzzy. Judging by the skirt lengths and dropped waists of the women center and right, the photo is most likely from the early 1920s before skirts began to rise around 1925.

The young woman on the right looks quite up to date. She wears the hat of the decade, a cloche. Her elegant t-strap shoes have a high heel. The show stopper is her beautiful coat with an elaborate border trim, perhaps embroidered or made to look as if embroidered. Too bad we can’t see the colors here.

The middle aged woman in the center has elements of old and new. She is keeping up with fashion with her dropped waist coat. Her bicorne hat was not the shape of the moment, but was often seen in the twenties. Although it’s hard to make out her shoes against her dark stockings, they appear to have the characteristic twenties straps. However, her dark dress, almost reaching her ankles, looks like it comes from an earlier era.

Fashion historian Joan Severa calls the tendency of older women (and men) to wear outdated clothes the “fashion lag.” We can speculate why the oldest woman here looks so old fashioned. Many women wore old clothes to clean, and she looks like she was just interrupted doing household chores. Or maybe she decided that the loose shapes of the twenties were not for her.