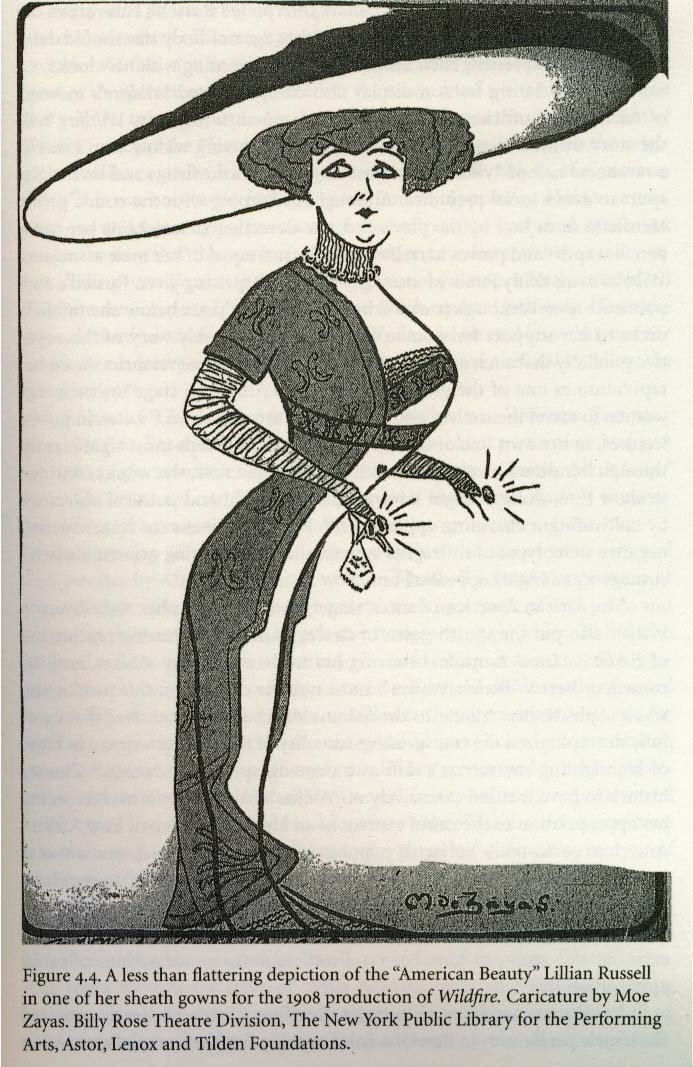 Lillian Russell, 1908. From When Broadway was Runway. Click to enlarge

Before the era of film, women went to the theater to discover how the latest looks would move on real women’s bodies. During the late nineteenth and early twentieth centuries, there was a partnership between leading actresses and the fashion industry. The reigning divas of the stage would go to France in the summer to get the latest looks and then tour with their new wardrobes during the following year.  Eventually they developed ties with department stores to get their stage outfits. With a short time delay, viewers in small cities from Louisville to San Francisco could see what was in style.

In her fascinating book When Broadway was the Runway: Theatre, Fashion, and American Culture  (University of Pennsylvania Press, 2011), theater historian Marlis Schweitzer examines this phenomenon in the United States.  She shows how leading fashion magazines like Harper’s Bazaar and Vogue featured the outfits of stage actresses, much like movie stars are treated today.  New York opening nights got a reputation as dressmakers’ performances, where the women who made clothes for elite segments of society could get a look at the latest designs. According to Schweitzer, some wealthy women even sent their maids to take notes. Not only did the theater popularize Parisian designs, it was also the source of original fashion crazes such as the Merry Widow hat.

Older women could gain valuable fashion information when no-longer-young actresses performed. When the silhouette changed from the tightly corseted waist to the sheath gown around 1908, Lillian Russell showed them how it would look on a more mature figure. While some critics were scandalized, a segment of the female viewing public took it as an endorsement “that neither age nor body size should deter women from expressing their sexuality or experimenting with new looks (150).”