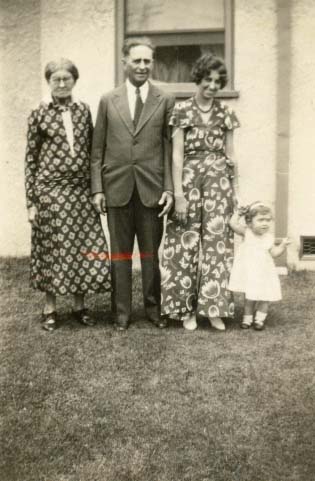 Family photos are a wonderful source to reveal the range of clothing options for different generations.  This particular found photograph, labeled “Bonnie Crisco 1934” by an unknown hand, shows a stark difference between old and young.  The mother or grandmother on the left appears to be wearing clothing from an earlier era.  Not only does her dress have the dropped waist of the previous decade, but the very high collar and austere parted hair add to her old fashioned look.

By contrast, the daughter or granddaughter on the right has on a boldly printed pants outfit. It looks like a jumpsuit, but more likely it was a shirt and pants combination with a tie waist. By the mid-1930s, you could buy these sets much everywhere, from in major catalogs to stores. They were first worn outside the house as beach wear. Wide pants were also recommended by stylish magazines for evening parties. However, choosing this look for a daytime family event was probably unusual.

Given their extremely different styles, I wonder how well these two women got along. Did the young woman pick her outfit to irritate her relative? Judging by the look on the older woman’s face, she had succeeded.

This entry was posted in 1930s and tagged generations, textile prints. Bookmark the permalink.