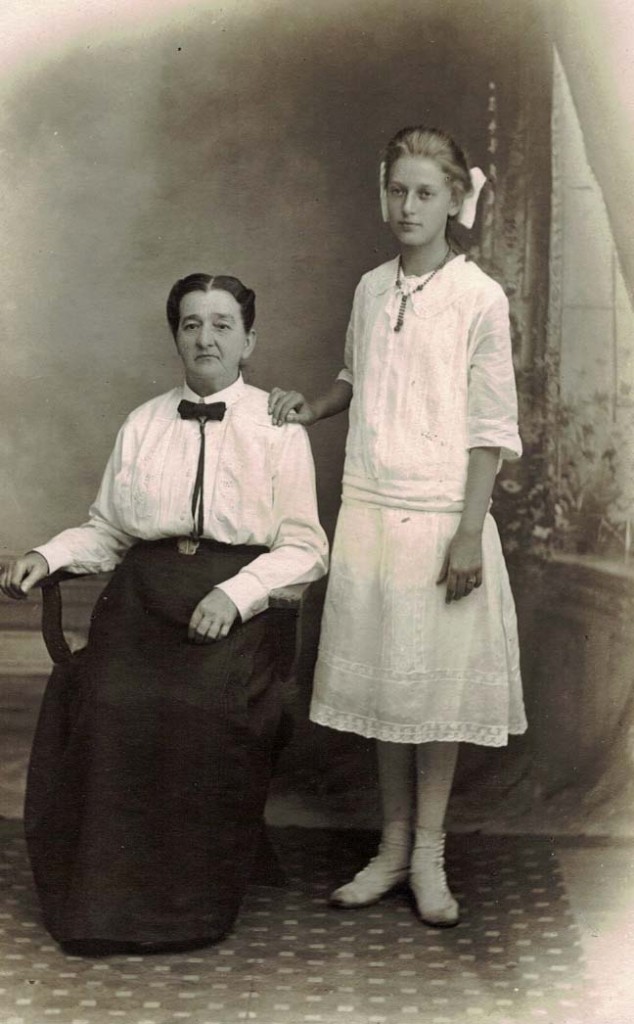 This studio portrait was printed on postcard stock, a popular method in the early 1900s. The clothes are from that era as well. The mother/aunt/grandmother here wears what we might call the uniform of adult American women at the turn of the century—a white shirtwaist and dark skirt. In a famous 1909 editorial, “American Fashion for American Women,” the Ladies Home Journal claimed that the shirtwaist was an American invention exported to Europe, bucking the usual fashion trends.

Just what is a shirtwaist? “Waist” is an old term for blouse. This style was called a “shirtwaist” because it had elements of a man’s shirt, often buttoning up the front with collars and cuffs. In the photo above, the blouse even has French cuffs with cuff links, something I haven’t seen before. Although shirtwaists could come in prints and colors, white was the most popular style. In casual settings, they were worn without jackets, as we see here. According to fashion historian JoAnne Olian, the shirtwaist was first popularized in the 1890s and remained a mainstay of the Sears catalog for over 25 years. (Everyday Fashions 1909-1920 as Pictured in Sears Catalogs, ii).

I’m fascinated by the older woman’s tie. Many women wore men’s ties with their shirtwaists, giving them a business-like appearance. (See one here in this family photo.) The woman above wears what looks like a bow tie with a loopy ribbon added. Maybe she was trying to soften the look of her shirt by adding ribbons trailing down the front.

Young and Old in Seattle, 1900s
At the Breakers Bath House, ca. 1906
On the Street in Chinatown, ca. 1900
This entry was posted in 1900s and tagged shirtwaist. Bookmark the permalink.