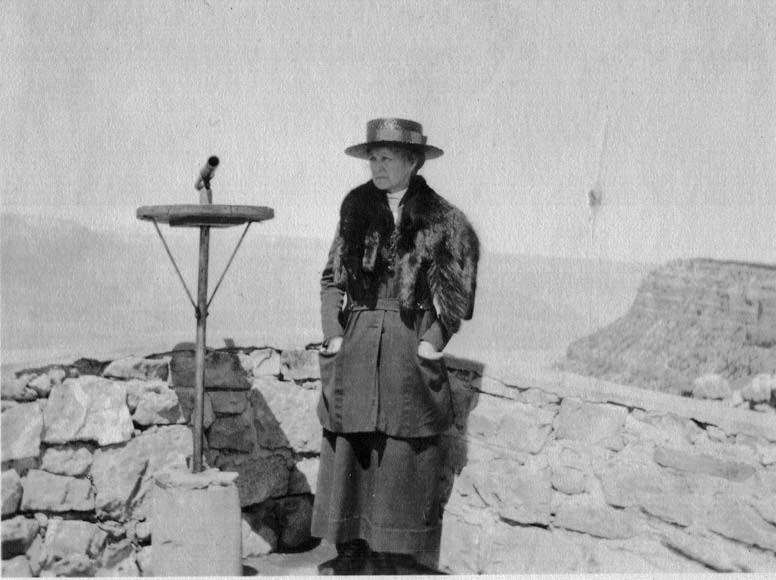 Tourist photos interest me because they can show a kind of transitional clothing.  Most likely people do not dress in their best clothes, since travel brings challenges.  However, they are also often heading out into public and do not pick their most casual attire.  (That is until today, when some happily head to the airport in their pajama pants.)

The cut of this older woman’s suit follows the styles of around 1916-1917.  Her flat boater hat was not at the height of fashion at the time and the simple ribbon trim looks austere compared to some of the trimmings of era.  Her fur shawl places her more on the dressed up side of tourist clothing.  But I think her garments look well worn, perhaps taken from the back of her closet.  Look at the pronounced hemline on the skirt, as if it had been laundered many times.  The jacket has well-used baggy pockets.

Although I’m sure there are many similar views, this might be the overlook from Bright Angel Lodge on the south side of the Grand Canyon.  When the photo was taken, tourists could reach the area by train. Did she just pose for the photo, or did she spend some time walking the rim?  Too bad we can’t see her shoes—they might have provided an answer.

Burning the Mortgage, 1915
Panta-loons by Jessie Gillespie, 1914
A Skirt with Fur Trim, mid 1910s
This entry was posted in 1910s and tagged fur, hats/headcoverings. Bookmark the permalink.