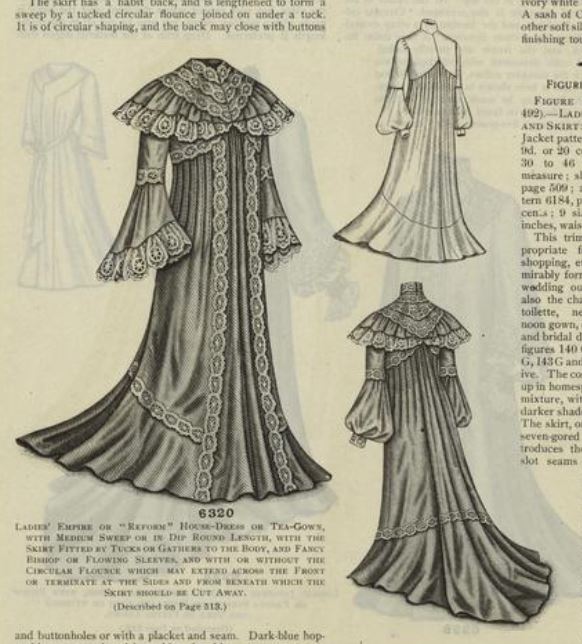 Charlotte Perkins Gilman was a noted writer, feminist, and sociologist at the turn of the twentieth century.  She was also an advocate of dress reform, that movement which struggled against corsets, uncomfortable clothing, and unnecessary finery.  Her views on what she regarded as the sad state of women’s clothes were laid out in a long essay, “The Dress of Women,” published in 1915 when she was fifty-five. Here she railed against hobble skirts, high heels, and big hats.

In the same year, Gilman wrote a feminist utopian novel called Herland about a society of women without men. What did they wear?  Their outfits had three components, starting with a cotton underlayer reaching to the knees, then a kind of union suit that could be made of many different fabrics, and finally either a tunic or long robe on top. Older women dressed just like younger ones, except perhaps for more elaborate outer layers; they were quite proud of their gray hair. In the words of the male narrator, “They had evolved a costume more perfect than the Chinese dress, richly beautiful when so desired, always useful, of unfailing dignity and good taste.”

I was especially intrigued by the middle layer, which sounds like something I might wear. “The second garment was fairly quilted with pockets.  They were most ingeniously arranged, so as to be convenient to the hand and not inconvenient to the body, and were so placed as at once to strengthen the garment and add decorative lines of stitching.”  Throw a silk jacket (or tunic) on top, and I would be good to go.

This entry was posted in 1900s, 1910s and tagged generations, popular culture. Bookmark the permalink.