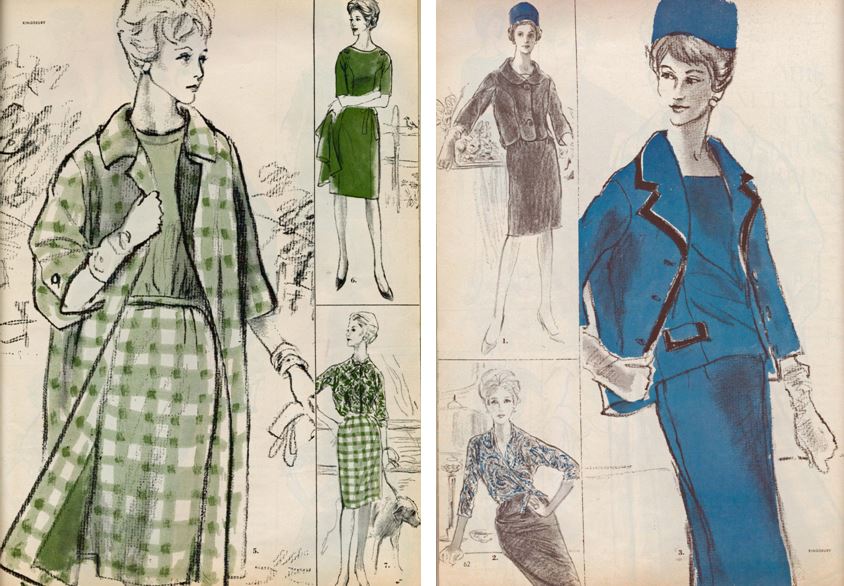 In 1961, Mrs. Exeter was fading from the pages Vogue magazine, where she had first been introduced in 1948. She only appeared three times that year, once to explain why she needed two long evening dresses, once to show off dresses with sleeves, and once to lay out her fashion principles. (In a nut shell—choose clothes with a firm, but not hard outline; look for an easy fit over the diaphragm; and disguise areas that easily reveal age, especially the upper arms.)

But while she was disappearing from the fashion magazine, Mrs. Exeter was still a lively presence in Vogue Pattern Book, one of my very favorite sources for fashion and sewing history. The August/September 1961 issue devoted four pages to patterns deemed suitable for this older fashion plate. Called “Mrs. Exeter’s Two Fashion Worlds,” two pages presented clothes that “fit perfectly into a country-to-suburban background.” Another two pages featured outfits for “brisk-paced city living.”

What kind of patterns did Mrs. Exeter favor? In general, they were those offered in larger sizes. Her clothes came in sizes 12 to 20 (bust sizes 32 to 40), with a few offered up to size 42 (a 44 inch bust.) Other patterns in the magazine typically had a range from 10 to 18 (bust sizes from 31 to 38). All of Mrs. Exeter’s outfits had sleeves, while many clothes in the smaller sizes did not. With the exception of one shirtwaist dress, Mrs. Exeter favored a slim line, without gathers or pleats. And perhaps it goes without saying that only the college girl got to wear pants. They did not figure in Mrs. Exeter’s fashion universe at all.

But lest it you think that Mrs. Exeter was a fashion conservative, take a closer look at what she wore to walk her dog—a check skirt combined with a floral print top. This is by far the boldest combination of prints in the entire magazine. Between you and me, I don’t think  Mrs. Exeter would have been caught dead in such an outfit.