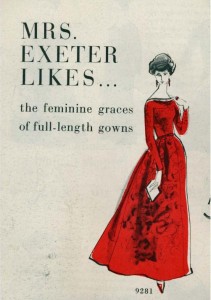 Although Mrs. Exeter’s age was never certain, if she was well into her fifties in 1948 she must have been born in the 1890s.  That meant she probably gained a lot of hand sewing skills as a child.  Since her family was well off—she muses about her debutante ball at times—she might have even had a sewing machine as she learned her craft.  Thus it should come as no surprise that Mrs. Exeter had excellent sewing skills, and that she used her position to recommend Vogue Patterns to her faithful readers.

Vogue Patterns had existed since 1905, so it is interesting that Mrs. Exeter only became involved in selling them in 1953—five years after her first appearance in Vogue magazine.  On her sewing table in October of that year were a wool day dress, a black afternoon suit, a blouse, and a long skirt—quite an ambitious list.  In 1955, she endorsed two dress patterns:  “Each has the lines she finds most becoming to her: the shallow V-neckline, the good tapered sleeves, the illusion of slender length.”  Even the New York Times’ occasional features on sewing sometimes used Mrs. Exeter to recommend patterns that the editors felt older women might like.

Mrs. Exeter never had her own pattern line, but in 1955 Vogue Patterns created a special section in its pattern catalog for styles that would appeal to older women.  In addition, the Vogue Pattern Book, a special magazine introducing new pattern styles, sometimes ran spreads on designs that might suit Mrs. Exeter and her friends.  The October/November 1958 issue had 10 pages of recommendations, including day dresses, suits, and evening gowns.  Although the line drawings showed a very willowy woman, many of  the patterns came in large sizes. Mrs. Exeter was careful to recommend looks that were “kind to slender and not-so-slender figures.”

This entry was posted in 1950s and tagged Mrs. Exeter, sewing. Bookmark the permalink.