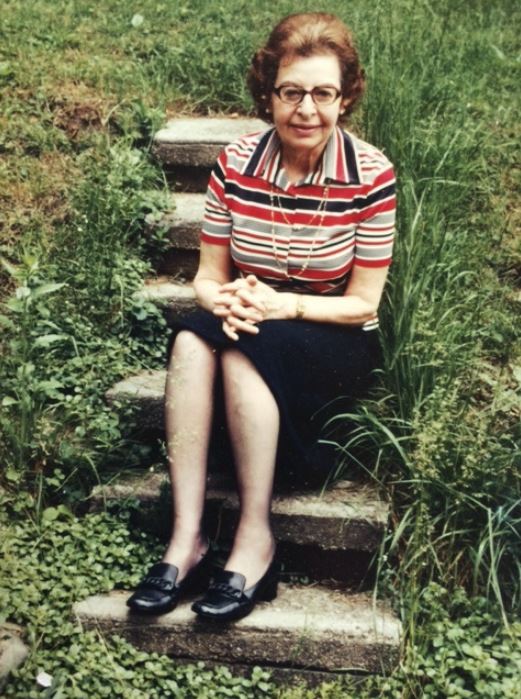 Below Michelle Braverman, of the blog Allways in Fashion, remembers her mother, Ida Ruskin.

If I could describe my mother’s fashion life in one word it would be disciplined. While that may sound strict, the thoughtful restraint she showed in dress served her well as she handled life’s twists and turns. Her two favorite expressions were, “God helps those who help themselves” and “No use crying over spilled milk”.

My mother was not born a beauty but became beautiful as she matured. She was trimmer and more stylish in her 50s than as a young wife and mother. And she never let herself go. One of my last memories before her death at age 89 is bringing new blouses to the nursing home for her approval. There she was something of a fashion star, known for always wearing a tailored skirt and sophisticated print blouse. And my grief after her death was never greater than when I would spot a blouse I knew she would have loved. How many people mourn their mothers at TJ Maxx?

But let’s back track. Free association…

She favored tailored separates— shirts or blouses or jersey tops, pencil or a-line skirts, dressmaker suits. She was not a “boyfriend” anything or a “girlie” anything. She liked a “good cloth coat” and small pieces of costume jewelry and couldn’t care a fig about precious jewels.

She knew how to tie a scarf, a trick I never mastered. She used the girl scout knot.

She put her stockings on with an old soft pair of white gloves so they wouldn’t run.

In her 40s (divorced and working as a private secretary) she started a subscription to Vogue (and cancelled Better Homes & Gardens). She never lusted for anything except a red leather clutch she saw in Vogue in the spring of 1954. My sister and I chipped in and bought it for her. It was $10. 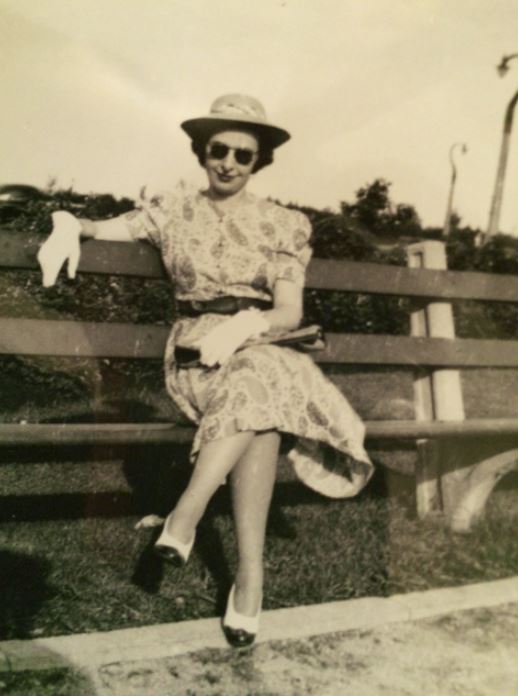 She liked brown and white or navy and white spectator heels in summer. At some point these were replaced by black patent leather (probably when spectators were no more).

She never wore old clothes to do chores. She didn’t own any. Everything was in good condition (mended if need be), clean and pressed. That meant wearing a housedress for housework with sometimes an apron over that.

I never remember her wearing black. Her basic color would be brown in fall/winter and navy in spring/summer.

In the ’60s she had a color epiphany and wore kelly green or bright yellow. She had a little more fun with fashion after that.

She moved to New York City in her 50s and retired from her office job at 62, began dressmaking for editors at Condé Nast and for an ad agency with a fabric account. She worked part time at Lord & Taylor and discovered her wanderlust. She planned travel wardrobes as thoroughly as itineraries.

She wore pants first in the late 1960s when she began going on cruises. They were not for day. Her pants were evening slacks, and I suspect she never felt comfortable in them— or on the cruises.

She never met a leopard she didn’t love. She once had a leopard belt made from the genuine animal— about 3 inches wide with a square leather buckle. It’s stunning; I have it but can’t bear to wear the real thing.

She purchased shoes, gloves, girdles and bras (custom made by Edith Lances as she was hard to fit) and bought nightgowns but sewed everything else, even her bathing suit.

One of my fondest memories was of the two of us spending a weekend sewing. We’d cut, mark and baste on Saturday and sew all day Sunday. The machine was in the hall, the ironing board in the kitchen. Meals were taken on the run, but we were each wearing new outfits on Monday.

Shoes played a major role in her life. She met my father as she saw him working in a shoe store and finally went in to try him on for size. She wore 7 1/2 AAAA, very hard to find, so she was always looking for shoes (not more husbands). And shoes did her in. She tripped on a sidewalk in New York City and broke her foot badly. It never healed and put her in Enna Jetticks and a lot of pain thereafter. She was wearing beautiful Delman pumps at the time, so padded for comfort that her foot barely sat in the shoe. She was 75. If I learned anything from that, it is to wear flats.

This entry was posted in General and tagged colors, New York, sewing, shoes. Bookmark the permalink.