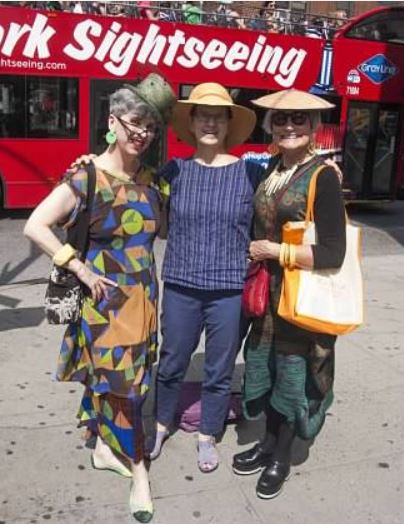 Although I come from the vast suburban expanse of Southern California, I felt very much like a country mouse when I met the idiosyncratic fashionistas on the streets of New York. Well known in certain circles for their own blog and their frequent appearance on Ari Seth Cohen’s site, these two women have their own distinctive style. It includes asymmetrical clothing designs, unusual eyeglasses, bright colors, big jewelry, and quirky hats. (Their outfits are described here.) Everything about me looks plain in comparison—my monochromatic outfit (heavily creased because of the heat), my workaday sunhat, my lack of jewelry.

I knew that eccentric dressers draw attention, but I hadn’t considered just how much until I met these women on the street. When I spotted them, they were surrounded by a small crowd of people attracted to their outfits. These admirers knew nothing of their internet fame, but could tell that they were witnessing something unusual. And remember this all took place on the very crowded sidewalks of New York.

Will I change my style after this encounter? Probably not, but I am looking around for another hat. Or maybe I should just paint this one orange.

Fan Mail for Jhane Barnes
Olive Kitteridge's Homemade Dress
Book Review: The Woman I Wanted to Be by Diane von Furstenberg
This entry was posted in 2010s and tagged About Me, eccentric, hats/headcoverings, jewelry, New York. Bookmark the permalink.