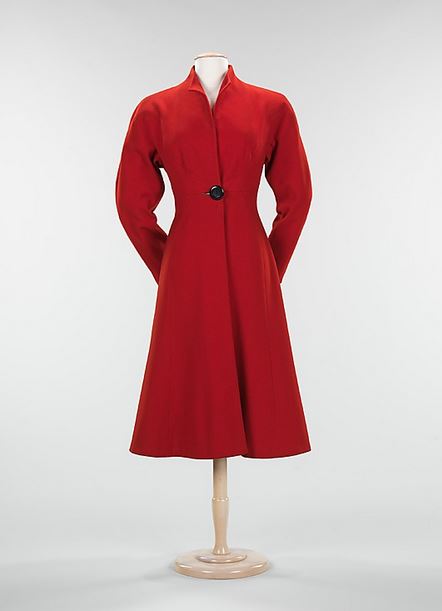 On a recent trip to New York, I caught the tail end of the much acclaimed Charles James exhibit at the Metropolitan Museum. The show, which mainly featured James’s gowns, was a technological wonder. Many of the clothes were documented in elaborate digital displays that showed the garments’ history, inspiration, and structure. The exhibit organizers were able to trace the designs in such detail because of the depth of the Charles James archive. It includes not only finished garments, but also drawings, patterns, muslins (early versions made out of inexpensive fabric), and other records that show how the clothes were made. To preserve the garments, and perhaps to make all the technological wizardly easier to see, the two main exhibit rooms were very dark.

James is most famous for his elaborate evening gowns. But what I loved best, both here and in the much smaller Chicago show, were the coats. This red coat, called the “lyre coat,” was featured in the digital displays. According to the exhibit documentation, “The beautiful lyre-shaped front seaming of this coat functions simultaneously as a decorative motif and a structural device. But the essence of James’s ingenious engineering is seen at the back, where the shoulder panel is cut in one with the side panel of the skirt.” You can see the elaborate structure of this simple looking coat in the pattern. 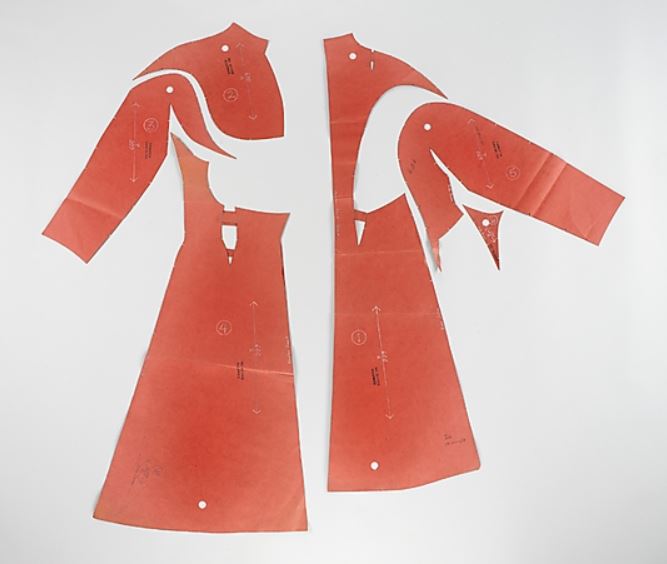 I am certainly revealing my twentieth century soul when I say that my favorite part of the exhibit was a small well-lit room filled with items from the extensive James archive—pages of notes from a planned autobiography, pattern pieces, dress forms, and experimental projects. It is here, rather than in the fancy digital displays, that I really got a sense of  Charles James at work.

Fashion Clash, 1948
Posing for the Photographer--American Indians, 1940
A Uniform for the Old--A Lace Collar on a Black Dress
This entry was posted in 1940s and tagged coats, designers, New York. Bookmark the permalink.