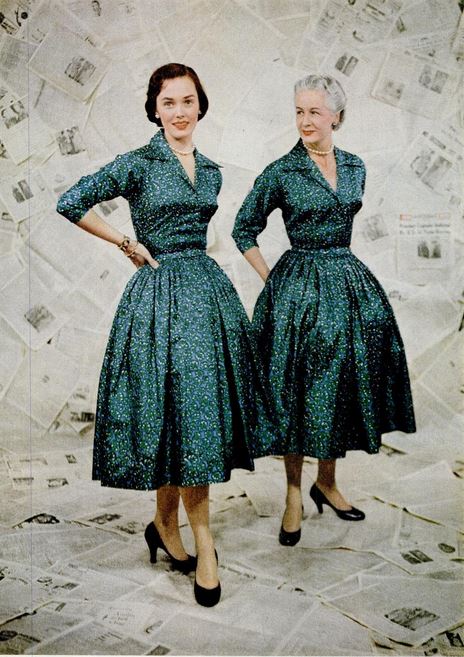 If you spend any time studying the clothes of well off women of the 1950s and 1960s, the name Mollie Parnis will come up sooner or later.  She was a well known designer of the era who dressed a number of First Ladies.  I was thrilled to discover an article about her by Annette Becker, “Mollie Parnis: Tastemaker,” in the new book The Hidden History of American Fashion.  In the article Becker described a case where one of Parnis’s dresses, the model 448 from 1955, became so popular that it inspired an article in Life magazine.  Of course I turned immediately to the source to see what the fuss was all about. 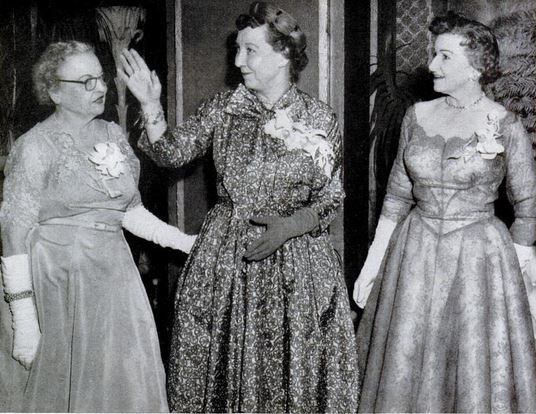 Here’s what happened.  In the Spring of 1955 Senate wives hosted a reception for Mamie Eisenhower, who was a regular Parnis customer.  The First Lady showed up wearing the blue green Parnis dress.  And so did another attendee, Mrs. Durris Crane. This prompted headlines across the country.  “Embarrassed? Mamie, Guest Dressed Alike,” appeared in the Cumberland Times of Maryland.  “Another Dress Like Mamie’s” opined the Press Democrat of Santa Rosa California. 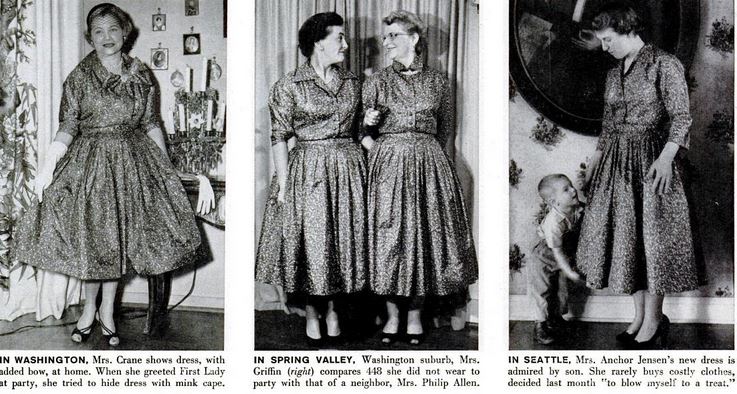 The incident prompted an article in Life about the national popularity of the Parnis design, which was bought by women from Washington DC to Washington State.  At $90 (about $830 today), it was not an inexpensive dress.  However, some women, like Mrs. Anchor Jensen of Seattle on the right above, decided to purchase it as a treat.

Although most of the customers were closer to the First Lady’s age of 58, not all of them were.  Ad copy from Bonwitt Teller, featured above, presented it as a style to please young and old alike.  Parnis claimed to be mortified by the whole affair, but certainly she must have enjoyed the free publicity.

Mrs. Exeter in Sews with Vogue Patterns
Robert Frank and the Older Woman
Pretty in Pink, 1953
This entry was posted in 1950s and tagged colors, designers, first ladies, Washington DC. Bookmark the permalink.

1 Response to The Famous Blue-Green Dress by Mollie Parnis, 1955