About Pantsuits, Not Politics 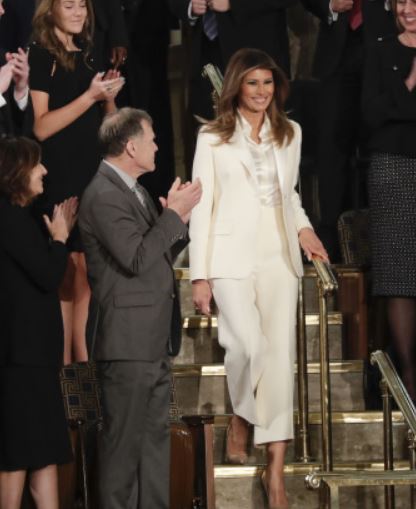 The American media is abuzz with interpretations of what Melania Trump might have meant by donning a white pantsuit to her husband’s first State of the Union speech.

Speculation is fun, but what interests me is the fact that she was wearing a pantsuit at all.  I see this as another breakthrough for women in pants. In general, American First Ladies have a more restrictive dress code than other women in politics.  While many congresswomen have shown up to the annual speech in pantsuits, as far as I can see this is the first time a First Lady has done so. (Please correct me if I’m wrong).

There was a lot of bad fashion press when then Secretary of State Hillary Clinton met Chancellor Angela Merkel, both wearing pantsuits.  Suzy Menkes called them “two political war horses who have won the right to wear what they want—which in their cases meant obliterating their femininity so that their clothes became as unremarkable as the guys.” (“Boy Meets Girl,” New York Times, February 28, 2010).  She doubted that a pantsuit could ever be remade into an attractive garment for a woman.

But none of the commentaries I have read about our new First Lady’s choice of clothing attacks the idea of the pantsuit itself.  We can speculate on the reasons—Melania Trump signals her femininity with her long hair, big makeup, high heels; she is much younger than “political war horses” who have made their mark with pantsuits in the past; her version is fashion forward and could never be confused with a man’s suit.  But maybe, just maybe, it shows that the pantsuit is finally safe for all women to wear in almost all situations.  I’m looking for it at the next inauguration ball.

The Birmingham Project of Dawoud Bey
The Anokhi Museum of Hand Printing
Women in White
This entry was posted in 2010s and tagged first ladies, pantsuits, power dressing. Bookmark the permalink.

1 Response to About Pantsuits, Not Politics