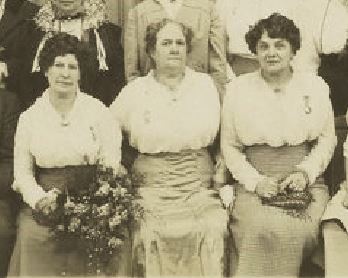 While some women dressed for the Panama Exhibit as if going to a party, others chose everyday wear. To the left of the fancy matrons in the middle of the photo are three older women wearing shirtwaist and skirt combinations.

The shirtwaist style was an American original. Launched in the 1890s, it dominated American women’s dress for almost two decades. Many historians of American fashion consider it an indication of American women’s love of relative informality and practicality. My friend Alice, who studies professional women in the newspaper industry, calls the shirtwaist and skirt combination the “New Woman” costume.

By 1915,  this beloved look was on its way out.  At the start of the decade, the fashion forward abandoned it for dresses with higher waistlines.  By the twenties, the waistline would drop much lower or disappear altogether.

What does the shirtwaist say about these women who wore it to this special event in 1915?  They probably chose something comfortable and familiar, a style that had served them well in the past.  However, they had dressed up their outfits with special details–note the ruffled collars and pins to mark the occasion.

This entry was posted in 1910s and tagged California, jewelry, shirtwaist. Bookmark the permalink.