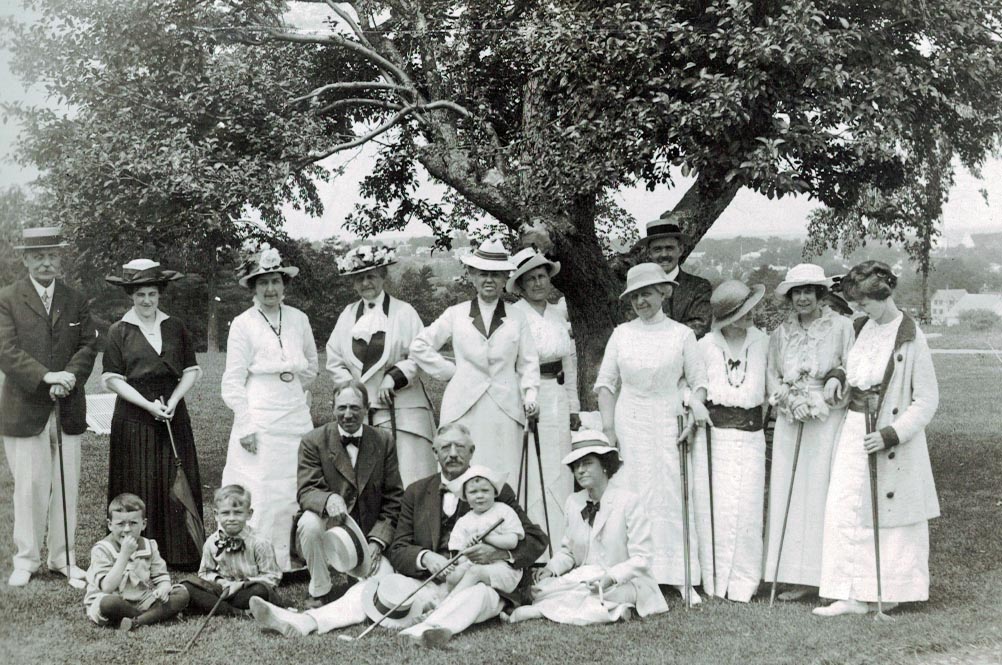 There is a long note on the back of this photo, partly obscured by black paper from where it was ripped from a photo album.  “Dear Emily,” it reads.  “Do you remember this swell crowd?”  Then the writer goes on to talk a lot about Bill, who looks a lot better after shaving off his whiskers.  According to the note, Bill is at the center of the action, teaching everyone tennis and learning how to dance.  I wonder if he is the tall man in the back on the right.

What a sporty looking crowd! Obviously it is summer time, given the white dresses and white shoes. Do you think the women really played golf or were they just using the clubs as props for the photo? The woman on the far night is wearing very flat shoes, often advertised for sports.  And although it might be hard for us to imagine women moving much in these outfits, historic photos show us that they did. 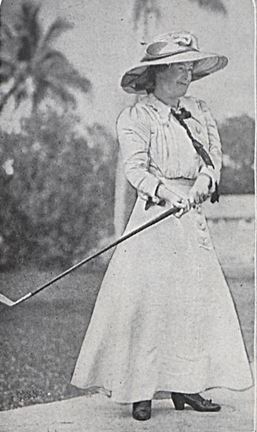 There are many clues leading me to date this photo to the early 1910s. First off is the length of most of their skirts, which show just the tops of their shoes.  Next are the hats, which turned from wide and exuberant to less dramatic in the first years of the decade. We see both styles here.

But it was really the necklines that grabbed my attention.  The “v” neckline, so common now, was introduced into ladies’ day wear around 1910.  Then it was an avant-garde style, regarded as scandalous by many who were used to the very high necklines of decades past.  In this photo the oldest women sport high necklines, while some of the younger ones wear the newer style. Corset types also appear to divide the generations.  While the older women look tightly packed in their clothes, the younger ones favor looser styles.

Were there discussions between young and old about just what was proper to wear in this group portrait?

A Skirt with Fur Trim, mid 1910s
Elderly, Matronly, or Mature? Montgomery Ward Experiments with Names
Fourth of July in Syracuse, 1918
This entry was posted in 1910s and tagged generations, sportswear. Bookmark the permalink.