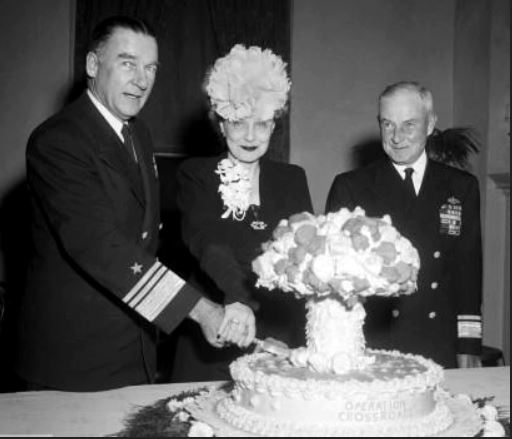 What is more amazing, the cake or the hat?  This photo marks a celebration of atomic bomb tests on Bikini Atoll in November, 1946.  In a series of blasts on the tiny Marshall island, the US government aimed to investigate the effects of the explosions on flora and fauna. It was obviously a different time in American history, when the words celebration and atomic bomb could be easily linked.  As I’m sure most of you know, the bathing suit was named after the bomb blast.

I could not find any information about the woman in the photo, the wife of Admiral William H. P. Blandy, pictured on the left.  In this photo, Blandy was in his mid-fifties.  I think his wife looks to be in her fifties also.

Apparently the photograph caused some controversy.  A letter to the editor by Navy officers to Time magazine reported that the admiral and his wife were not responsible for the cake; they merely were on hand to cut it. The hat might serve as evidence to the contrary, though.

Kay Thompson : A Pioneer in Pants
Mrs. Exeter's Color Schemes
The New Look and the New Waist Line
This entry was posted in 1940s and tagged hats/headcoverings. Bookmark the permalink.