Does this Hat Make my Head Look Big? 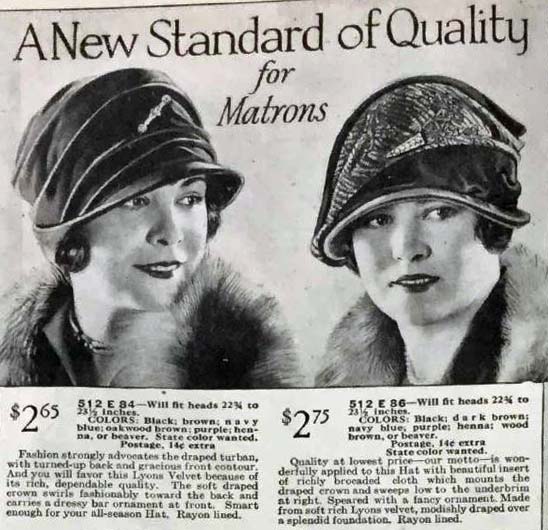 Staring in 1900, almost every Montgomery Ward catalog I paged through offered hats designed specifically for older women.  At first I noticed only the random hat, when words like “mature” or “elderly” caught my eye.  But by the 1910s catalogs began to have special pages devoted to older women’s millinery needs.  What made a hat suitable for the more “mature”?  I didn’t do a systematic comparison, but they seemed to be less flamboyant than other headgear on offer. There were fewer flowers and feathers and often a more subdued color scheme.

Then beginning in the mid 1920s, I began to notice a puzzling change.  Hats on pages aimed at “mature women” were also advertised as being available in larger sizes.  Each catalog had several pages of hats, but only those aimed at older women came in larger sizes.

Why link old heads and large heads? Surely it can’t be because the editors thought head sizes got bigger with age. I’ve done a lot of reading on the body changes that take place with the aging process; expanding head size is not one of them. 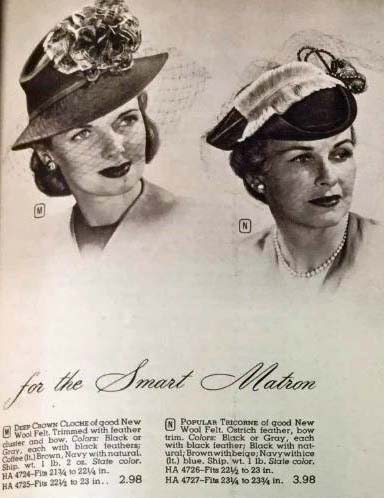 Was the assumption that the more subdued styles that suited the older crowd would also appeal to those with bigger heads?

Or did the editors want to deal with two niche markets at once, getting the old and the large out of the way at the same time?

I turn to you for your ideas on this puzzling marketing strategy.  And while we’re at it, just why is the term fathead an insult?

Dorothy Liebes—Celebrity Weaver
Unruly Seamstresses in the 1930s
The Way You Wear Your Hat, 1947
This entry was posted in 1920s, 1930s, 1940s and tagged hats/headcoverings. Bookmark the permalink.

4 Responses to Does this Hat Make my Head Look Big?