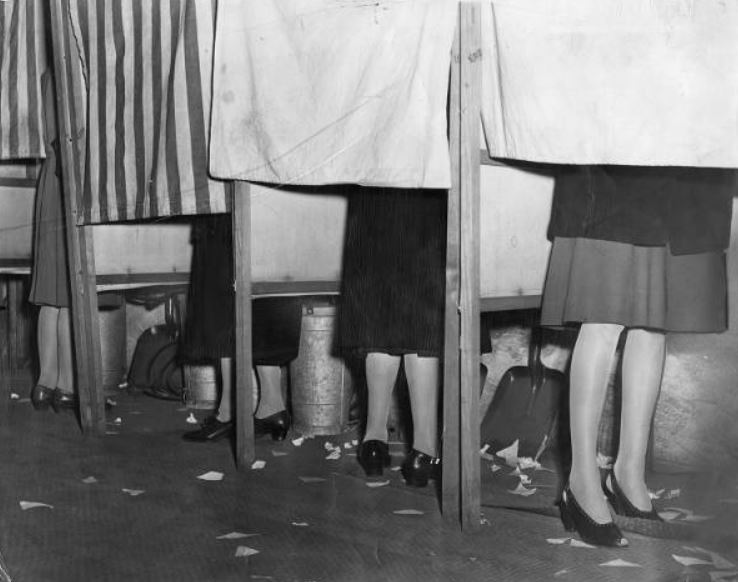 This imaginative photograph comes from the 1944 presidential election. Voting took place as American troops were still fighting in Europe and Asia. Sitting President Franklin D. Roosevelt won 81% of the popular vote.  Such a landslide is unthinkable in today’s divided America.

What can we tell about these four women just by their skirt lengths and their shoes?  Only one, on the far right, was a true fashion plate.  Her skirt is stylishly short and she wears shoes with an open toe and open back out on the street in early November.  Vogue editor Edna Woolman Chase hated this trend, but obviously this woman was not paying attention.  The woman to the far left was perhaps on the younger side.  Her shoes are almost flat, her skirt hovers around her knee, and we can see a slice of a very trim body.  I suspect that the woman second from the left is the oldest, judging by her sensible shoes and very long coat.

I filled out my vote-by-mail ballot in my bathrobe sitting at the kitchen table.  Styles have changed, but the importance of voting has not.

Harford Frocks, 1947
Mary Colter--Architect of the Southwest
Kitchen Aprons in the War Effort
This entry was posted in 1940s and tagged coats, generations, Pennsylvania, shoes. Bookmark the permalink.