“Fifth Avenue Likes New Look, but Main Street Does Not” 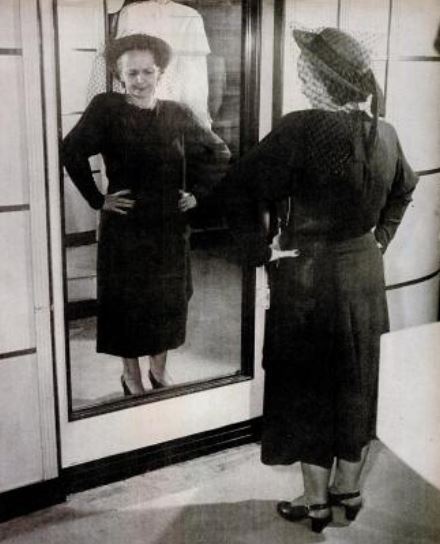 The new clothing style that emerged after World War Two created an excitement and furor that are hard to imagine today. The New Look symbolized a lot of things—the end to post war austerity, a more feminine silhouette, and the conclusion of massive government  intervention in the fashion industry. But for many women, it also meant that they would have to buy or jerry rig a new wardrobe if they wanted to stay in style.

The New Look was big news in 1947.  Amidst articles about the beginnings of the Cold War, Life published long spread on the new fashion silhouette.  Part of it included a two page analysis of how average women responded to the shift. The first page, “Fifth Avenue Likes the New Look,” showed eight small photos of stylish young women in longer skirts. The second page, “But Main Street does not,” had only this one shot of this unhappy older woman trying on the new style. “The furrow on the brow of Mrs. Walter J. Allan trying on a new length dress in Dallas Texas is duplicable [sic] in all the other 48 states. To the average US woman, this fall’s rapid change in fashion represents a real challenge to her pride, her pocketbook, and her innate sense of independence. It may take two years of wearing out present wardrobes before the new look becomes familiar on America’s many main streets.” (125)

This brief analysis touches on two big issues in the dissemination of fashion–its move from the center (New York in the case of the US) to the periphery (Texas) and from the young and stylish to the older and reluctant. “Oddly, the longer skirt is being accepted mainly by younger women with shapely legs,” opines the unnamed author.  The implication is that Mrs. Walter J. Allan should be happy to get a little more coverage.

The Spring Suit, 1940s
Suiting Up
Spring Outfits for Mother and Daughter
This entry was posted in 1940s and tagged generations, New Look, Texas. Bookmark the permalink.

4 Responses to “Fifth Avenue Likes New Look, but Main Street Does Not”