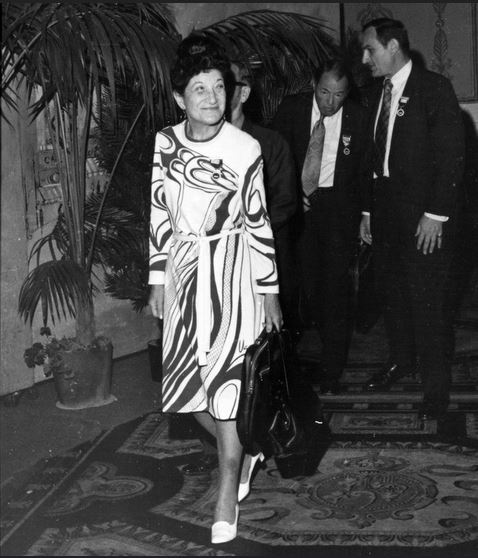 This photo from the Kheel Center’s International Ladies Garment Workers’ archive shows  the Italian American labor leader and feminist, Angela Bambace.  Born in 1898, she began working in New York City’s garment district when she was seventeen.   A formidable organizer, she is credited with opening the first women’s branch of the ILGWU in 1936.  Later she became involved in civil rights work in the South.

The Kheel Center has many photos of Bambace after she joined the executive board of the ILGWU, where she was often the only woman pictured in a group of men.  She was always beautifully dressed, as she is here.  Well into her sixties in this photo, she looks up to the minute in her boldly printed long sleeved shift dress, belted at the waist. If you look closely, you will see the distinctive signature of Vera Neumann on the dress.  Not everyone who works in and around the clothing industry is interested in fashion, but she obviously was.