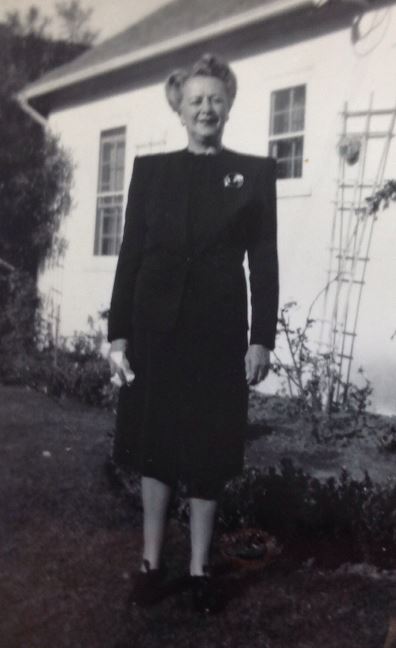 Alice Reingold, the grandmother of a high school friend, lived the high life in Hollywood from the 1920s to the 1960s. Of a German Jewish background, she “married down” when she took up with an Eastern European Jew. He proved to be a good catch, though, working his way up from a watch repair shop in Portland Oregon to become the owner of an elegant jewelry store in Beverly Hills. They ran in fast Hollywood circles, with wide friendships in the movie industry. Her husband played poker with gangster Bugsy Siegel and Harry Warner, one of the founders of Warner Brothers.

Always impeccably dressed, Alice never went out in anything but a coordinated outfit. Dressmakers came to her house to make her clothes. Although this photo is not dated, I’m guessing that it comes from the immediate post war years given the cut of the shoulders and the length of the skirt. Note the sensible shoes and the beautiful gold broach.

How old was Alice here? My friend believes she was born around 1890, although no birth certificate was ever found. That would put her in her late fifties. Since she lived in the land of forever-young starlets, Alice was always very sensitive about her age. She instructed her grandchildren to call her “Honey” because “Grandmother” made her feel old.