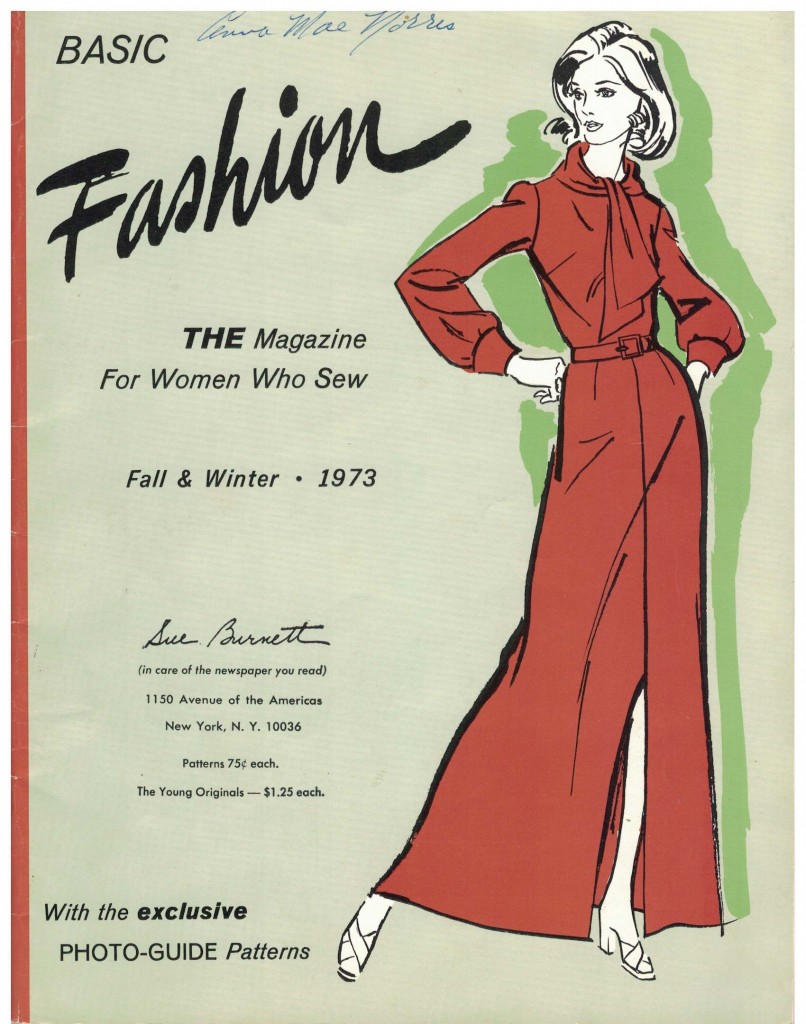 Sometimes research is best done on ebay, my own guilty pleasure. There I discovered that Sue Burnett patterns put out its own pattern magazine, called immodestly Basic Fashion: THE Magazine for Women who Sew. The issue I found was for Fall/Winter 1973, but there are records for them back into the 1950s. 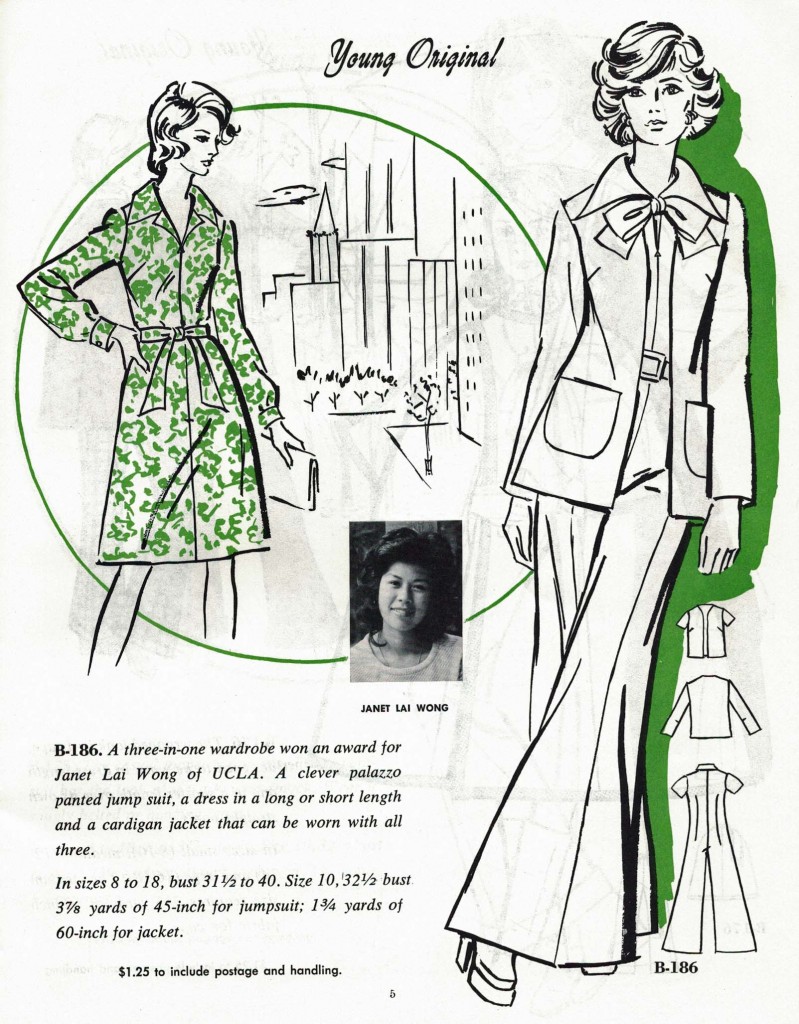 The sixty-five page magazine belies the company’s reputation as one aimed primarily at the older set. It begins with fifteen pages of “Young Originals” patterns, which cost more than other offerings. Some of these were designed by young fashion students. Although they might not be right on top of fashion trends (there were no midi skirts, for example), the styles included wide legged pants and long skirts, styles that could also be seen in the Vogue Pattern Book at the same time. Janet Lai Wong’s three piece ensemble above included a conservative looking dress, but it also had a jumpsuit, part of the seventies revival in style again today. (And tell me why—those things were never comfortable in my humble opinion.) 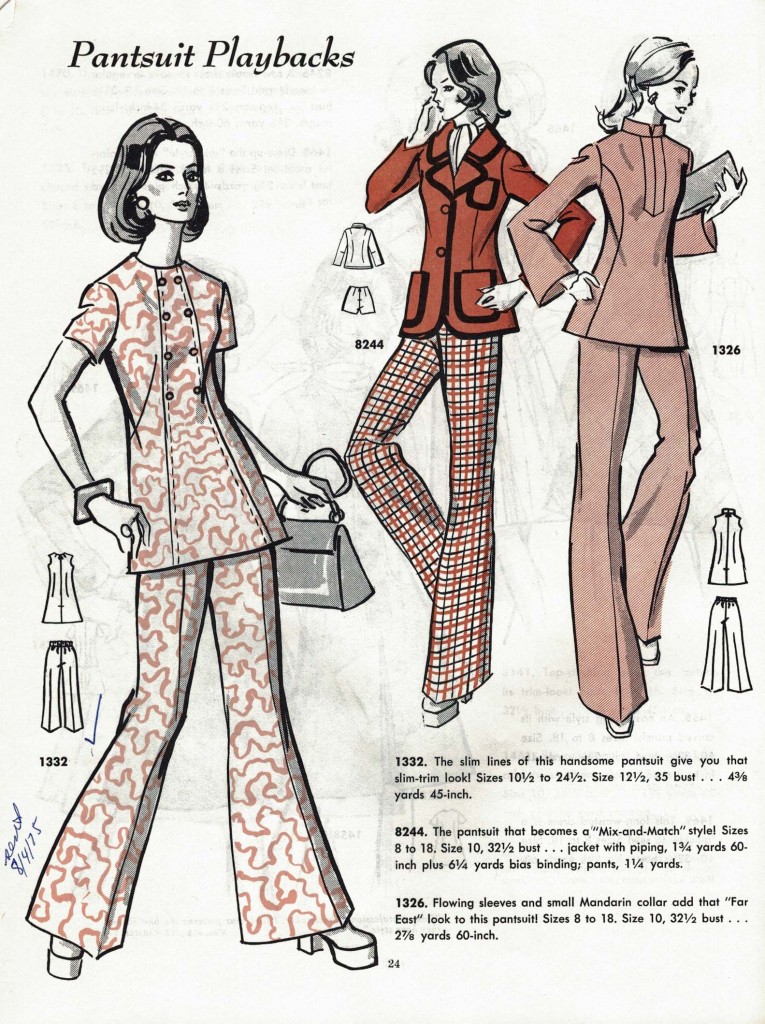 After the “Young Originals” came eleven pages of patterns apparently aimed at all kinds of women. On offer were dresses, separates, jumpers, and even pant suit patterns. The one on the left, modeled by a woman in high platform shoes, even came in half sizes. 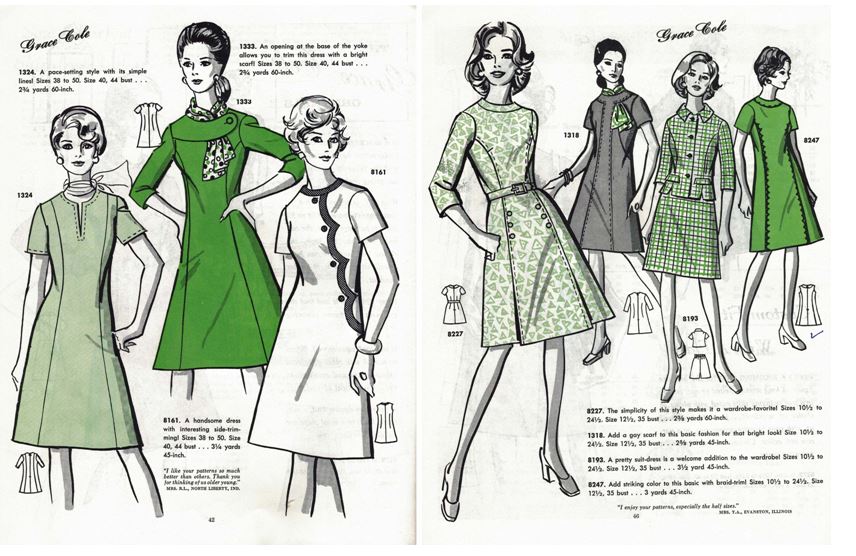 But Sue Burnett did not forget her older customers and devoted six pages to patterns meant specifically for them. “Our Grace Cole Originals are designed to help the woman with the fuller figure who often has fitting problems,” the copy reads. Dresses here ranged from size 38 to 50, or bust sizes of 40 to 54, with half sizes for shorter women with a bust size from 33 to 47 inches. These styles did look dated to me, with many unbelted sheath styles harkening back to the sixties.

The magazine included instructions about specific sewing techniques, lists of helpful notions, and advice on how to mix patterns to make a coordinated wardrobe. There were also patterns for doll clothes, for children, and even a few for men. To show that Sue Burnett was keeping up with textile trends, it even offered a two page explanation on how to sew ultra suede, a quintessentially seventies fabric that is notoriously hard to sew. And there were no ads at all! For those who wanted simple patterns and good tips on sewing, this might have been a more useful magazine than Vogue Pattern Book.

My copy of Basic Fashion belonged to Anna Mae Norris.  Guessing from the discrete check marks she made next to favorite styles, she wore half sizes.

This entry was posted in 1970s and tagged generations, pants, sewing. Bookmark the permalink.