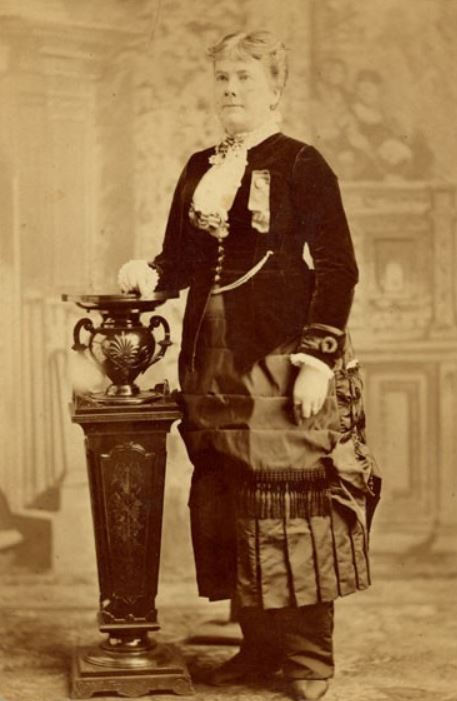 Included in the awe-inspiring book Dressed for the Photographer is this photo of feminist activist, Marietta Stow in her 1880s version of reform dress. Stow was a philanthropist and social reformer of long standing who ran for California governor in 1882 and US vice president in 1884, despite the fact that women did not yet have the vote. As a widow who had lost her inheritance in a probate court, she also advocated for women’s rights in tax and inheritance law. Clearly she was a woman ahead of her time.

Born around 1830, she would have been about fifty when she donned this striking campaign outfit. According to Joan Severa, it was a dressy garment in the standard style of around 1882, but with the skirt raised up at the waist to make room for pants below. I was fascinated that these were not frilly bloomers, but “what appear to be black satin trousers of the same leg form as men’s.” (403). Her flat boots also have a masculine touch. But all of this was to make a point on the campaign trail. Severa notes that she did not wear reform dress at home.

This entry was posted in Pre 1900 and tagged California, pants, power dressing. Bookmark the permalink.