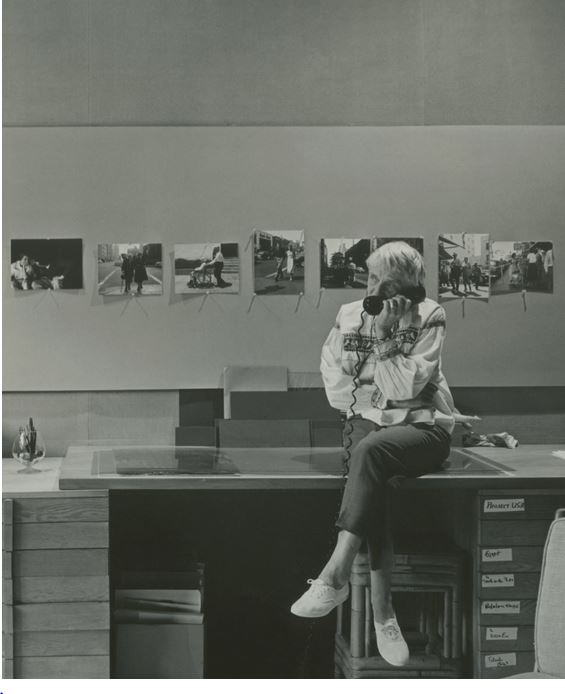 Recently an impressive documentary about this famous photographer, Dorothea Lange: Grab a Hunk of Lightning, aired on PBS. The film is directed by Lange’s granddaughter, the award winning cinematographer Dyanna Taylor. There is also a companion book with the same name by Lange’s goddaughter, Elizabeth Partridge.

I admit my immediate interest was to see my friend Sally on film—she is featured as one of the experts on Lange’s life and work. Although I thought I knew something about Lange, I had a lot to learn. Her transformation from a bohemian portraitist in San Francisco to a socially engaged documentarian of the Great Depression was fascinating.

The film got me interested in Lange’s style of dress. With Sally’s help, I combed resources to trace how her clothing changed throughout her life. Essentially I discovered three phases: the bohemian style of the young portrait artist in San Francisco; the utilitarian style of the working photographer in the field during the Depression; and a merging of the two strains as Lange aged. 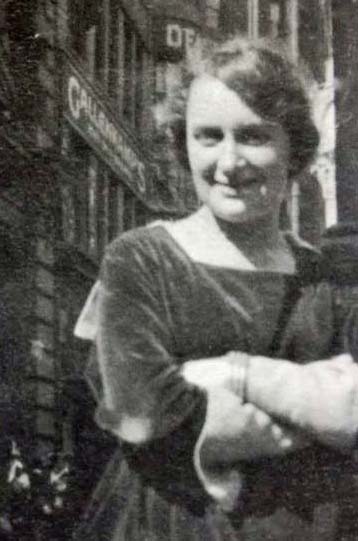 There aren’t many photographs of Lange when she was a young photographer, but those that do exist show a kind of dreamy style. Take a look at this undated photo, probably from the mid 1920s. She wears what looks like a velvet dress with wide cuffs and a big collar. Note the silver bracelet, some of which I think is covered up by a cuff. It was most likely her wedding bracelet from her first marriage to artist Maynard Dixon. According to Dyanna Taylor, the couple stood out even in bohemian circles in San Francisco. He favored capes and a cane; she often wore striking emerald green clothes, her hair topped with a beret. 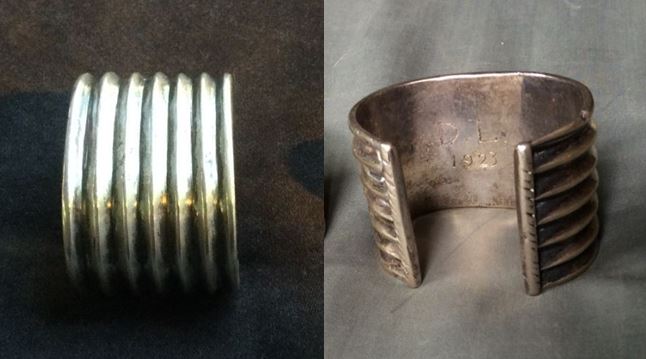 In the mid 1930s, Lange began to take photographs of the social turmoil in San Francisco. She divorced her first husband and started working with the labor economist Paul Schuster Taylor. They collaborated on documenting the radical changes taking places in California agriculture brought about by the Great Depression. Soon they married and both began work for the Farm Security Administration, a New Deal Agency famous for its photographs of the depression years. There are many pictures of Lange from this period, all in a simple utilitarian style—short hair, wide legged pants, a button front shirt, flat shoes, and often a head covering. 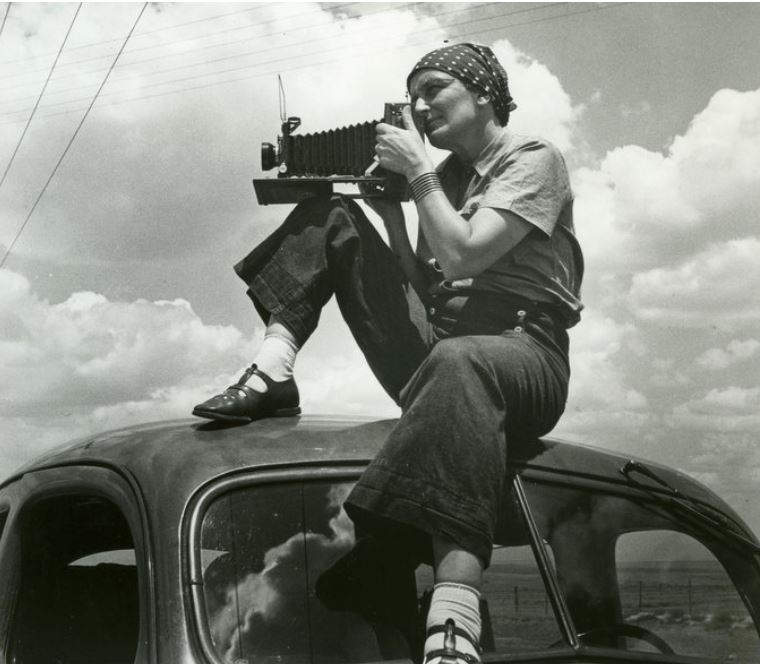 But despite her practical clothes, Lange wore the wedding bracelet from her first marriage and added a silver banded wedding ring from her marriage to Paul Taylor. Obviously she believed in wearing her history.

As she aged, Lange merged her bohemian and utilitarian styles. She added jewelry to her signature collection, including this distinctive silver necklace with large round beads. With a flair for dramatic presentation, in this photo she wore it with a wide belt that had buttons to match her necklace. Note the beret, long a signature piece. 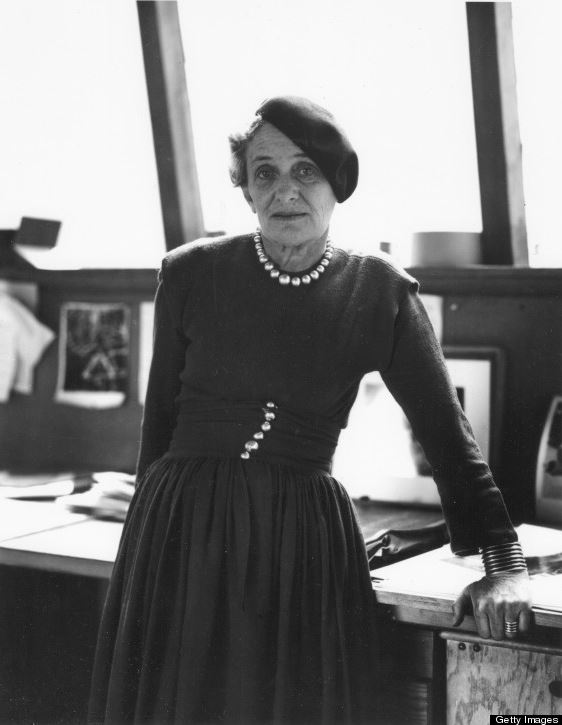 In her fifties, Lange began to take global trips with Taylor, who was working as an agricultural expert for the United Nations and the US government. She used these travels to acquire more jewelry and clothes. Favorites included Egyptian bracelets, a Laotian waiter’s vest, and white dresses, like the one below, inspired by clothing she saw in Korea. 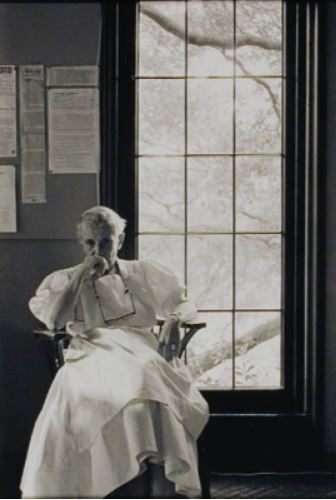 Lange used her signature jewelry to dress up even the simplest clothes, as in this portrait of her in a sweatshirt with her granddaughter Dyanna Taylor. She gives even an ordinary hoodie an element of style. 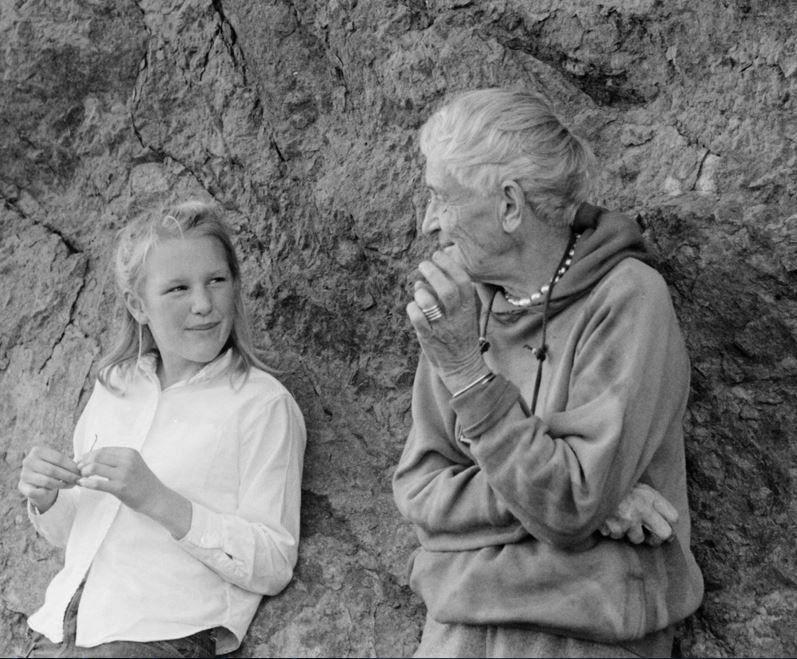 In 1964, Lange was invited to prepare material for an exhibition at the Museum of Modern Art, an overdue recognition of her importance in the field of American photography. Unfortunately, she died of cancer in fall 1965. The one-person retrospective, quite unusual for a woman, opened in early 1966. I cannot help wondering what she would have worn.

Thanks to Lisa Dixon Perrin, Sally Stein, and Dyanna Taylor for help with this piece.