The Woman in the Marx Brothers’ Movies 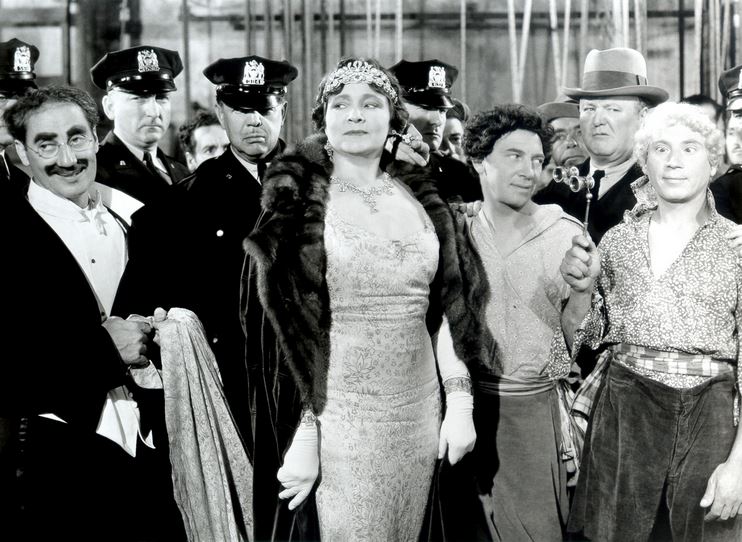 Part of the fun of Marx Brothers’ films is Groucho’s sarcastic ribbing with a rich dowager figure, a joke-filled interaction that reappears in seven films, including the classics Duck Soup, A Night at the Opera, and A Day at the Races.  The actress was Margaret Dumont, sometimes called the fifth Marx Brother.  Born in 1882, she was in her fifties when she played these famous roles.

In all the films, Dumont was the straight woman for Groucho’s jokes, many of which had to do with her size.  Here is one exchange from Duck Soup (courtesy of Wikipedia):

Dumont: I’ve sponsored your appointment because I feel you are the most able statesman in all Freedonia.

Groucho: Well, that covers a lot of ground. Say, you cover a lot of ground yourself! You’d better beat it; I hear they’re going to tear you down and put up an office building where you’re standing!

To facilitate the jokes, Dumont dressed to emphasize her size, sporting tight and often shiny dresses clothes that made her look larger than she was.   The bigger she appeared, the more fun Groucho had knocking her down.

Cat Lady with Sandals, 1930s
Visiting the New York World's Fair
The Fashion Lag on the Small Screen
This entry was posted in 1930s. Bookmark the permalink.

4 Responses to The Woman in the Marx Brothers’ Movies