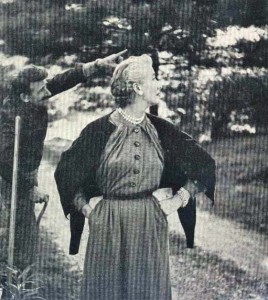 Vogue’s imaginary fashion adviser, Mrs. Exeter, was a hard worker.  Over the course of a decade, she kept up with fashion trends and interpreted them for older women.  Her task was to convince her target group that being stylish was not beyond their means or abilities, if only they followed certain rules.

What fashion maxims did Mrs. Exeter offer her readers?  One bedrock principle was investment dressing.  She advised older women to spend money on a few big ticket items each season, rather than spreading out their fashion budget on many smaller things.  It goes without saying that Mrs. Exeter had a lot of money to spend.  In 1949, she splurged on a $125 summer outfit, arguing that she could wear it for three years.  In the winter of 1953, she chose a $1000 honey-colored opossum coat.  (Up until now, I was not aware that opossum was a fashion choice at all.)

Mrs. Exeter had very firm ideas about the styles that were most pleasing to the older—and most likely wider—figure.  She liked to create the illusion of a smaller waist through lines and proportions.  Her skirts were not too long (matronly) or too short (young).  She loved two common fifties “New Look” silhouettes—a fitted top with either a full skirt or a straight skirt; however, she warned her readers against wearing anything too tight.  The words “pants” or “trousers” never crossed her lips.

Most important, Mrs. Exeter cautioned older women to disguise their weak points.  She wore gloves on her hands and pearls around her neck to camouflage these common indicators of age.  And one basic rule, never broken, was to cover her upper arms.  “I myself would sooner appear in my underwear as with my upper arms exposed.”  These are still words to live by for some of us.

Christmas Party, 1947
It's a Handbag!
Mrs. Exeter in the Vogue Pattern Catalog
This entry was posted in 1940s, 1950s and tagged advice literature, Mrs. Exeter. Bookmark the permalink.