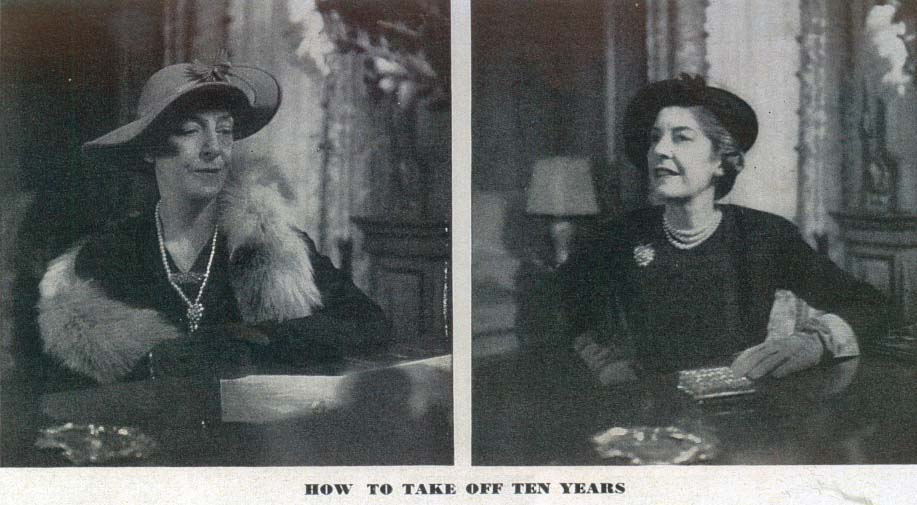 If imitation is the sincerest form of flattery, then the editors of Vogue must have felt very smug when they opened up Harper’s Bazaar in January 1949.  The rival magazine had started a new feature called “At My Age.” Here are the opening lines:  “In answer to letters, phone calls and pleas from friends all over the country, we inaugurate with these pages a monthly feature devoted to women of uncertain age…women in their forties, fifties, sixties.”  Although it did not come out monthly as promised,  the feature continued until the late 1950s.

In the future, I will write about “At My Age” on its own merits.  Here I want to concentrate on its function as competition to Vogue’s Mrs. Exeter.  The most noticeable difference was the lack of an identifiable heroine on Harper Bazaar’s pages.  Mrs. Exeter, with her breezy, sometimes wacky commentary, was a draw for Vogue.  “At My Age” had no central character.  The target audience for “At My Age” was also younger, starting at forty. Mrs. Exeter proudly proclaimed herself to be “fifty-odd” and some of her models looked to be well into their seventies.

However, the biggest difference was the stated purpose of the two features.  While Mrs. Exeter’s goal was to make older women look better, “At My Age” immediately focused on making older women look younger.  The very first article began with contrasting photos offering advice on “How to Take Off Ten Years.”  Although Mrs. Exeter was superior in every way, “At My Age” was definitely a sign of things to come.

Protesting in 1947
Wrapped in Fur
At the Grandparents' House, 1957
This entry was posted in 1940s, 1950s and tagged advice literature, Mrs. Exeter. Bookmark the permalink.