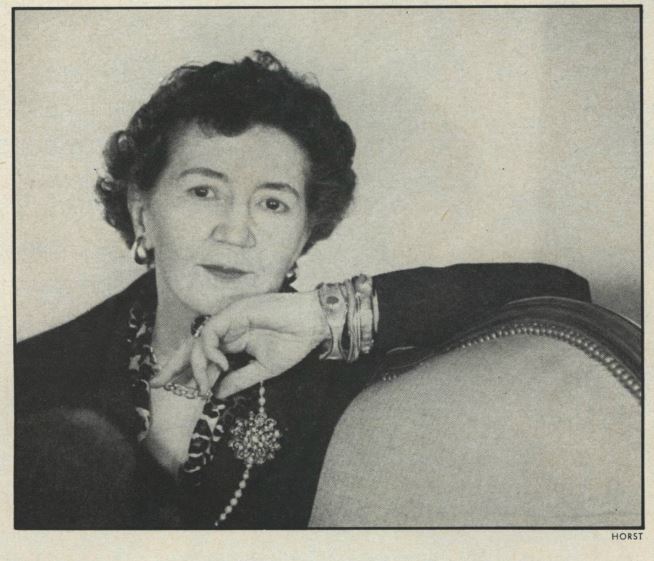 If you have been reading this blog for any length of time, you know my fascination with Mrs. Exeter, Vogue magazine’s style icon for the older set. I long to know who thought up this funny and influential character. Since septuagenarian Edna Woolman Chase was editor-in-chief of Vogue at the time, I assumed she must have had something to do with it. But it turns out my assumption was wrong.

While rereading Ready Made Miracle: The Story of American Fashion for the Millions by Chase’s successor, Jessica Daves, I came across this line: “Mrs. Chase retired as active editor [of Vogue] in 1946, but remained close to the staff until her death in 1957. Jessica Daves became editor in 1946.”(190) I immediately went to the Vogue archive and discovered this was true. On the masthead of the July 1, 1946 issue, Chase earns a place listed far up at the top as editor-in-chief of American, British, and French Vogue, but Daves is listed as editor of American Vogue. (She became editor-in-chief in 1952)

This puts Daves in charge when Mrs. Exeter arrived on the scene! This new scenario makes sense in many ways. Daves took over in the summer of 1946, and Mrs. Exeter arrived two years later. She was in her mid fifties at the time, Mrs. Exeter’s age, while Chase was twenty years older. Finally, Mrs. Exeter died when Daves was replaced by Diana Vreeland in 1963.

You can be forgiven for not knowing who Jessica Daves was, since she has not gotten a lot of love in fashion history books. Grace Mirabella, who succeeded Vreeland, had this to say about her: “In addition to her big legs and wide feet, she had bad hair, and a short round body, and in her early sixties she looked the way somebody in her late seventies might today…In her obituary, the New York Times quoted an erstwhile friend who said, ‘She was a portly woman with a face that resembled a baked apple, and if she wore custom dresses, they looked like ready-to-wear.’”(Grace Mirabella, In and Out of Vogue, 72). Ouch.

Daves has left few traces on the web, and some of what exists is inaccurate. Read this amusing/sad account by her great niece on several misidentified photos. And stay tuned for more on Jessica Daves in the future. I love a mystery.