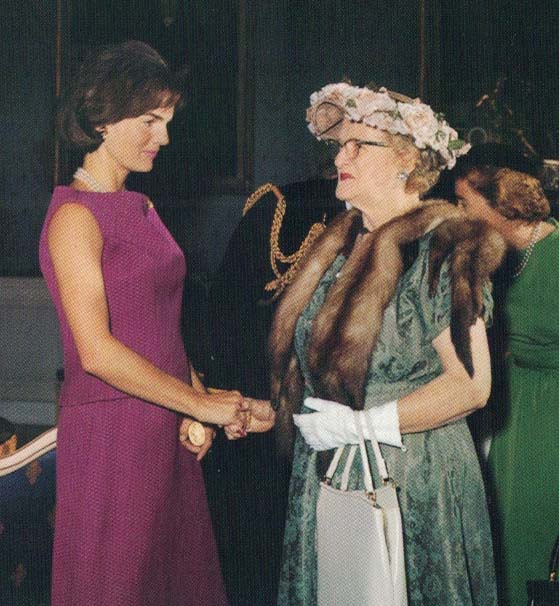 What did these two women think of the other one’s outfit when they met? I’ve been preparing a talk on Jackie Kennedy’s White House fashion for a local museum. The research has been a lot of fun.  In the process, I’ve come across many photos like the one above showing a very young Jackie (she was only 31 when she came to the White House) meeting older women.  The fashion contrast is astonishing.  Jackie wore up to the minute style, in this case a sleek dress with few embellishments.  Her companion did not.  Although these must have been her very best clothes, she looks quite weighed down by the past in her flowery hat, mink stole, and brocade dress.

Although not as striking, we can also see the contrast in this photo taken on inauguration day. Jackie wears a sleek coat and hat combination custom designed by Oleg Cassini.  The other powerful women next to her—Lady Bird Johnson, Mamie Eisenhower, and Pat Nixon–look fusty in comparison.

Jackie knew that she had youth on her side, even if her style of dress would soon be copied everywhere.  She forbid Cassini to make copies of the outfits he designed for her.  “Just make sure no one has exactly the same dress I do—the same color or material,” Jackie wrote to Cassini. “[I] imagine you will want to put some of my dresses in your collection—but I want all mine to be original and no fat little women hopping around in the same dress.”