Bessie McHugh from her Thirties to her Sixties 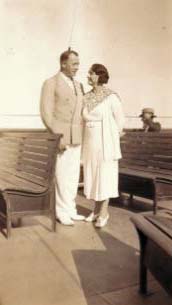 “On a steamer going to Catalina, June 25, 1934. That was the way we celebrated Our Anniversary.” So reads the message on the back of this romantic photo.  It depicts John McHugh, born in Ireland in 1889, and his wife Bessie, born in Illinois in 1896.  I suspect it celebrates their twentieth wedding anniversary. By that time they had had five children. It  is one of a stack of photos sent to me by Eimear Greaney documenting the life of her distant cousin John and his wife.

On their anniversary cruise, the two looked elegant in their white outfits.  They must have been well off to afford the trip from their home in Chicago in the midst of the Great Depression.  Bessie, here around 38, wore a drapey dress with a high waist and a gored skirt. The matching long jacket, quite the style in 1934, lengthened her shape. I would love to have a better look at the wide trim at her neckline. Or is it a scarf? 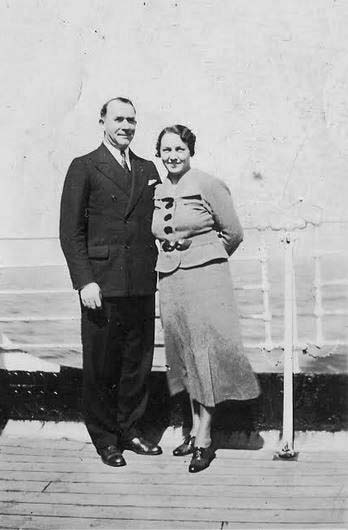 In 1936, Bessie and John were again on a cruise—perhaps for another celebration. Bessie was now around forty. She wore what looks like a wool suit with a peplum, a decorative belt, and an A-line skirt.  Peplums were part of “the new scheme of things,” according to Vogue magazine in 1936, so Bessie was right in style. The poor fit of the bodice drew attention to her full bust. Her shoes were sensible, but two toned to give them a little interest. 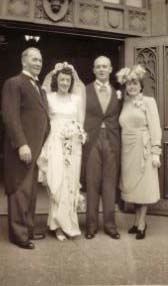 There were no pictures of Bessie again until 1947 at her daughter Margie’s wedding.  Even though the New Look had taken some of the fashion world by storm early in the year, Bessie was not converted.  Her dress, with its draped front, looks very much like a style I found in the Vogue Pattern Book for 1946.  Maybe she had found her dress well before the wedding and did not see the need to change. 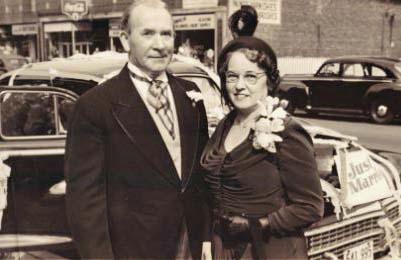 Three years later, in 1950, Bessie was snapped at the wedding of a friend’s daughter. We can’t see the bottom of the dress, but it is clear that Bessie decided to emphasize her chest with an elaborately ruched bodice.  The scooped neckline and corsage bring attention to her face. 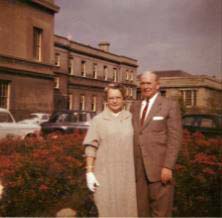 The first color photo was from 1958, when John and Bessie took a trip to Dublin.  Her beige coat appears to be the favored swing shape of the era.  Although she had on the short white gloves I clearly remember from my childhood, she wore no hat. 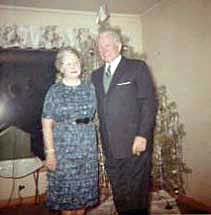 In this final picture, Bessie and John were at home in Chicago at Christmas time, 1962.  Bessie, at 66, had gone completely gray.  Her simple dress made nods to current fashion.  The blue print looks abstract and the shape a simple sheath with a belted waist. Compared to her other outfits, it is a little plain.  However, this was the first time we have seen her at home.

So here are the clothes of a prosperous American woman in mid-twentieth century middle America over three decades.  She followed the twists and turns of fashion, but not slavishly and always with consideration of her full figure.

Thanks to Eimear for the photos and to Familysearch.org, a comprehensive (and free!) site, for the genealogical information.

Do You Have a Signature Piece?
Mrs. Exeter's Marketing Power
Auntie Chris at Jones Beach, 1955

2 Responses to Bessie McHugh from her Thirties to her Sixties