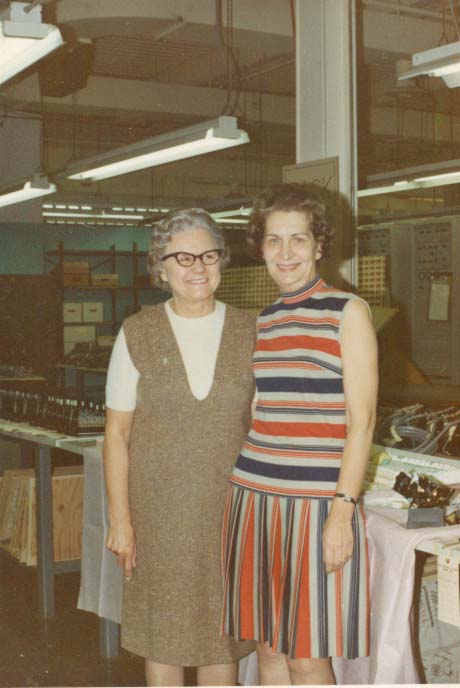 Time: 1971.  Place:  Data Products.  Event: A party for Blanche.  This much is clear from the notes on the backs of eight color photos I bought on ebay.  After looking at them for awhile, I think it is a good guess that they document a retirement party.  Blanche is the oldest person in all the photos.  In one she is shown shaking hands with someone who looks like the big boss and accepting a large envelope—perhaps a ticket for a Parisian vacation in gratitude for her hard work?

But lets move on to the clothes.  Data Products, wherever it was, had an older, mainly female, integrated work force. Blanche is by far the most conservatively dressed of all the women visible in the photos, with her beige jumper and white top. Her cat-eye glasses are no longer at the forefront of eye wear styles.  She doesn’t dye her hair.

Some of her coworkers have a bolder fashion sense. I am particularly drawn to the woman in the striped dress above, who looks to be in her fifties.  The contrast of horizontal stripes on the top and vertical on the bottom is interesting. The dress is short—just above her knees. Probably it is made of old style indestructible polyester, so it might still be available at a thrift store near you. 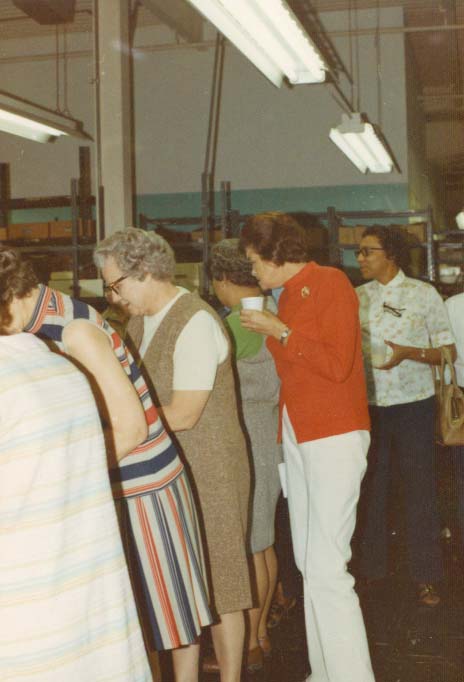 The group photo is not a great shot, but you can see two older looking women in pants!  The one in the foreground wears white pants and a red sweater.  An African American woman in the back is wearing dark blue pants and a light colored tailored blouse.  This was clearly a place that had permissive dress code, if it had one at all.  Too bad that there was no formal group shot of everyone lined up so we could compare and contrast their clothes.