The Changing Seasons in Iowa, 1953 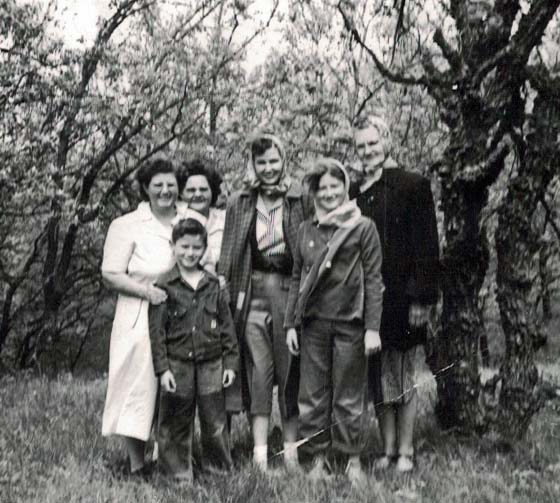 The contrast of the clothing drew me to this picture.  The family group—mother, two daughters, and son—are dressed up for chilly weather, while the two women on the left are wearing light colored summery clothing.  I’m thinking someone snapped the photo at a transitional moment, either April or September, when the weather can quickly change. (April is probably a better guess, given the flowers on the trees.)

Most of the writing on the back of the photo is covered by paper remnants left when it was ripped from a photo album.  Still legible is the place and date—Peterson Iowa, 1953. Already in the 1950s, the population of this small farming town in north west Iowa was shrinking.

The mother on the right doesn’t look like she had updated her clothing much since the forties.  Her coat has very wide shoulders and her skirt is fairly short for the time.  She has tied her kerchief close to her head.  However, her older daughter in the middle had an eye for current style. She wears cropped pants, crew socks, and perhaps tennis shoes.  Her scarf looks like it was adjusted more for color than protection. 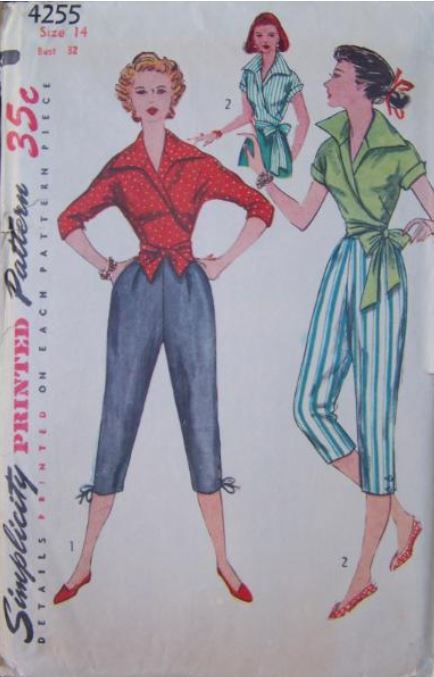 Where did she find cropped pants in her small town, far away from any big city?  Perhaps she made them herself. She might have used this 1953 Simplicity pattern, or maybe she trimmed off the legs of some pants she already owned.  One thing is for sure–she didn’t get them from Montgomery Ward.  The company, never fashion forward, didn’t offer cropped pants (called “fancy pants”) until 1954.

Portrait of a Woman with Butterfly
Advice on Aging from Glinda the Good
Mrs. Exeter in Sews with Vogue Patterns
This entry was posted in 1950s and tagged generations, hats/headcoverings, Iowa, pants. Bookmark the permalink.

1 Response to The Changing Seasons in Iowa, 1953