Who Was Mrs. Ralston? 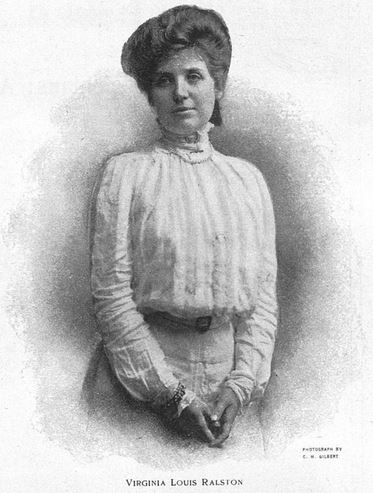 If you have ever looked at issues of Ladies Home Journal in the early twentieth century, you probably have come across articles by one Mrs. Ralston.  She gave advice on current fashion trends for all age groups and answered questions from readers. Ralston began her work at the very end of 1901, peaking around 1910.  After that, her articles began to taper off, ending altogether after 1917.

So who was she?  I’m lucky to have many digital resources through my university, including the Women’s Magazine Archive and Newspapers.com.  Using them I was able to put together a partial picture of her life.

Born in 1870, Virginia Louis Tartter came from Washington DC to Philadelphia with her widowed mother in the 1880s.  After making a brilliant debut, she married into Philadelphia high society in 1889.  Her husband was Frances W. Ralston, a military officer and cricket player.  After her wedding, she and her husband were frequently mentioned as part of the city’s exclusive set.

But in a few years, things changed. Mrs. Ralston opened a millinery shop on the city’s fashionable Rittenhouse Square.  Marriage problems? Money problems? A desire for a creative life? The newspapers did not say.  They simply mention her great success and then in 1899 her move to Philadelphia’s biggest department store, Wanamaker’s, as a buyer.

In December 1901, Ladies Home Journal introduced her as the editor of a new department of women’s clothes. “Mrs. Ralston knows the world of needs as well as the world of fashion, because it has been part of her business to study the needs of the moderate purse…As a mother, she has dressed her child; as a daughter, her mother; as a business woman, she knows what best becomes business women; a lover of pretty clothes herself, she is regarded as one of the best dressed women in the East.” (Ladies Home Journal, December 1901) 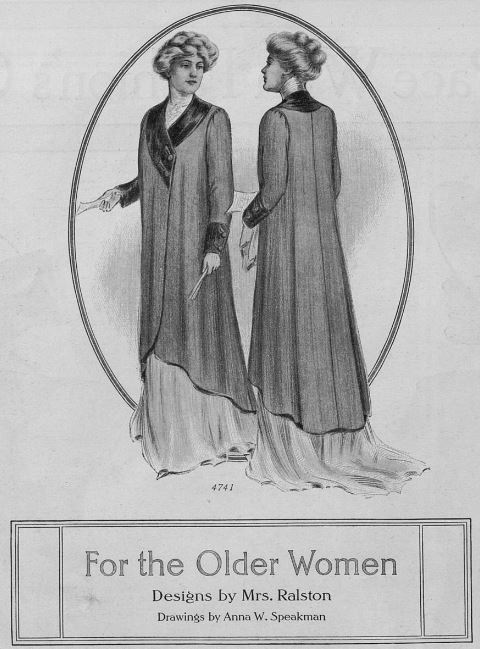 Her work in the journal was extensive.  Looking through the entries, I was surprised to discover how much she wrote about sewing.  She suggested redesigns of old clothes in new styles and gave extensive advice on possible fabric choices.  Her own designs were  frequently included. At first they were just inspirational line drawings, but starting in 1905 you buy paper patterns from the journal for fifteen cents.  Bust sizes for the outfits for “elderly” women pictured above went up to 44 inches.

In 1910, at age forty, Ralston changed course again. I discovered a newspaper notice  announcing that she had formed the “Mrs. Ralston Company” with the intention of opening a millinery and sewing school. (Philadelphia Inquirer, Sept. 21, 1910) While still contributing to Ladies Home Journal, her articles became less and less frequent.

From 1910 to 1920, she faded from newspaper coverage also.  Philadelphia newspapers listed several millinery and dressmaking schools, but none bearing her name. However, in 1921, one local paper announced she had been hired as an instructor for a course in modern dress design.  “The School of Industrial Art has secured Mrs. Ralston, at present Designer for the Leading Modists, Ladies’ Tailors and Dressmakers in America and for nine years with the leading Houses of Paris” (Evening Public Ledger, Oct. 1, 1921). Had she been in Paris in the intervening years?

Mrs. Ralston’s last mention was in the New York Times on February 11, 1925.  “Mrs. Virginia Ralston, said to have been at one time connected with the Ladies Home Journal of Philadelphia and other women’s publications, was found dead today in an Atlantic City beachfront hotel.” The cause—apoplexy, or stroke. She was only 55.

2 Responses to Who Was Mrs. Ralston?