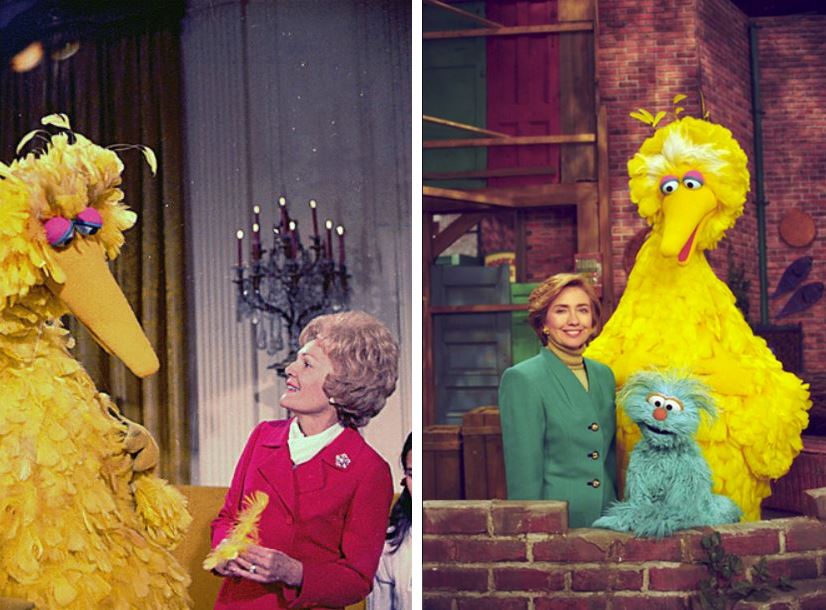 On the US National Archive’s Flikr site, there is a folder of photographs of “notable  women,” a fairly random selection of important American women.  It’s no surprise that First Ladies form the bulk of those chosen, and that they are most often captured in contexts dealing with children. I liked these two of Pat Nixon and Hillary Clinton posing with Big Bird, the famous character from the children’s show Sesame Street.  Nixon is photographed at a reception with children in the White House; Clinton is on the set.

While they are both in suits, the cut and color of their jackets are different.  In 1970, Nixon’s double breasted suit has the man-styled cut of the coming dress for success era.  Clinton’s jacket from 1993 has a softer, more feminine collar and the bigger shoulders of the period.  Don’t you wonder if she had on pants below the jacket?

Differences aside, there are also many similarities here.  Both wear solid colored jewel tones in what looks to be a similar fabric—maybe wool crepe.  Both have colored their hair and are wearing hair styles of the moment.  While Pat Nixon has a pin as a subtle highlight, Hillary Clinton has an even more fabulous accessory—the muppet Rosita, who even matches her outfit.

First ladies have made a habit of posing with Big Bird, including Laura Bush and Michelle Obama.  Lets see what Melania Trump does.

Amy Vanderbilt on (and in) Pantsuits, 1971
Teddi Winograd and Teddi of California
LuAnn in the Battle for Pants, 1971
This entry was posted in 1970s, 1990 and tagged power dressing. Bookmark the permalink.