When you listen to the self generated propaganda of the baby boomer generation, you might think that we were the first group ever to grow old with our legs still working and our brains more or less intact. But of course it isn’t true. In 1959, Life magazine did a four part series on aging in America.  One article in particular, “Practical Ways to be Old and Happy” (July 27, 1959), might have been plucked from the website Senior Planet. It followed four older men and women who were having the time of their lives. Their secret—they kept active refused to “retire” in conventional ways.

Because of my background as a historian of Soviet Russia, I was particularly drawn to the story of Mrs. Andrew Murray Williams (no first name mentioned), a seventy year old  leading a tour to the Soviet Union. She began working when her husband died as a way to make ends meet. Although many of her friends disapproved, she insisted that it was a way to avoid loneliness while seeing the world.

Almost everyone on the tour, mainly women judging by the photos, was over seventy. Despite the full daytime schedule, they would go out at night as well. “When people get bored, they get tired,” she opined. She was already planning a trip around the world, her third, this time including stops in India. 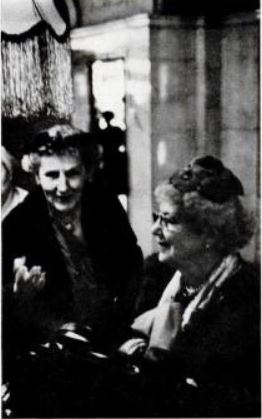 In GUM, the main department store in Moscow

I would love to have an inventory of her travel clothes. We see her in a Spring-like printed suit, hat, and jewelry on a bus; a dark suit, hat, and sensible shoes in Red Square; and a dark coat and hat in the department store. Her clothes betray no shift to looser styles already underway in 1959. Yet despite her slim skirt, she had no difficulties climbing up on a ledge to take photographs in Red Square. I wonder what the Soviets made of her and her older traveling companions.

A May Gathering, 1953
Robert Frank and the Older Woman
Madame Willi Posey
This entry was posted in 1950s and tagged hats/headcoverings, jewelry, New York, shoes. Bookmark the permalink.

5 Responses to Mrs. Williams in the Soviet Union, 1959