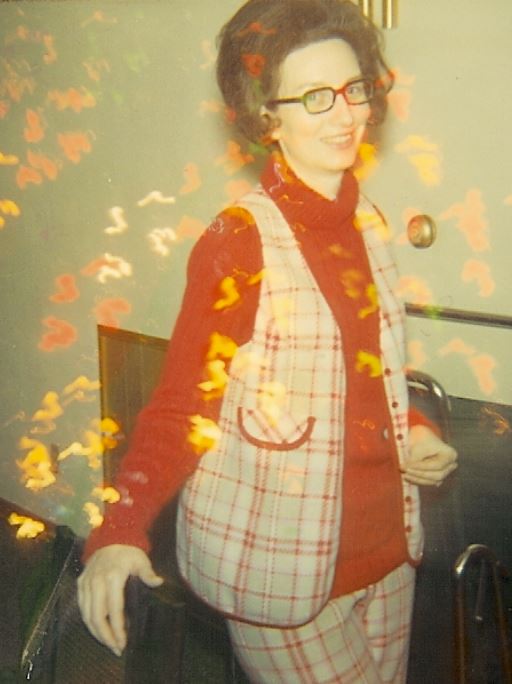 Today we take pants for granted—I do not own a single dress. But this story by reader LuAnn reminds us that it was not always the case.

She writes: “One snowy cold day in January of 1971, I wore a pant outfit (slacks and matching vest) to teach school. The principal disapproved and wrote up a formal complaint, to which I responded. Eventually the Teachers Union established guidelines designating the wearing of a matching pant suit permissible—no slacks with blouse or sweater. I was happy with this decision, wearing many woolen pant suits that I had sewn the rest of that year. When I tell my granddaughters this story, they think I should be in some Hall of Fame for Women’s Rights. Little do they know what other repressive rules existed. When I finished my teaching career staff members were wearing jeans and sweats. My how times have changed!”

She was 32 in this photo, earning her Master’s Degree while teaching and raising two children. Although she sewed most of her clothes, she purchased this outfit a local department store in Toledo Ohio.

Her story was not unusual for the time. During the 1970s, many American working women staged protests against restrictive dress codes. Women at CBS in New York, for example, violated rules en masse in order to get the company to change its policies. They called their action a “pants-in,” evoking the sit-ins of that era, and won. (“Pants-Ban Tempest at CBS,” New York Times, January 21, 1970.) Some employers found a way to back down gracefully. Although President Nixon had publicly denounced women wearing pants, the White House changed its dress code in 1973. (“White House Lifts Ban on Women in Pants,” New York Times, November 26, 1973.)  The reason given—the energy crisis. It was a lot warmer to wear a pants suit to work than a dress.

2 Responses to LuAnn in the Battle for Pants, 1971